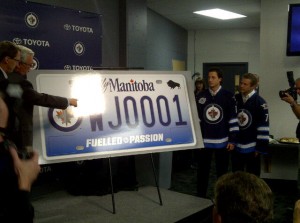 How much do the plates cost?

The plates cost $70 including GST.

Who gets the money?

The Winnipeg Jets True North Foundation will receive $30 from every purchase. Manitoba Public Insurance will also receive $30 (production costs, operating costs, cost recovery for implementation expenses). The Province of Manitoba will receive $10, as they do on all new licence plate purchases.

What is the True North Foundation?

When can I get my plates?

Customers can go to any Autopac agent starting Monday, December 12.

Can I pre-order mine?

Pre-orders will not be accepted. Customers will be able to purchase the plates on and after December 12 from any Autopac agent.

Will I be able to personalize the plates?

No.  Like the Bomber plates, the Jet plates are a pre-established set of letters and numbers.

I already own a set of Bomber plates. Once the football season is over, can I replace them with my Winnipeg Jets plates?

Yes.  Fans who own a Winnipeg Blue Bombers licence plate are still eligible to purchase the new Winnipeg Jets plates. You can even change the plates in between seasons at no extra charge. However, because the plate numbers on the front and rear of your vehicle must match at all times, you will not be allowed to use the Blue Bombers plate and the Jets plate simultaneously (i.e. you cannot have a Jets plate on the front of your vehicle and a Bombers plate on the rear).

How many plates can I buy?

If you are the registered owner of one or more vehicles that qualify, you can apply for the Winnipeg Jets licence plates for all of them. Only one set of Jets plates will be issued per vehicle.

What types of vehicles qualify for the plates?

All passenger vehicles such as cars, trucks, farm trucks, vans and motor-homes qualify for the Winnipeg Jets licence plates. Commercial trucks, motorcycles, mopeds and other non-passenger vehicles to not qualify.

I want to buy the plates as a souvenir keepsake. Is that allowed or do they have to be affixed to a vehicle?

Customers wanting to use the plates as a souvenir keepsake can still purchase them at a cost of $70.  However, there will be an additional charge of $15 for administrative and processing fees.

Why have the jets been chosen for these specialty plates? Why not the Goldeyes or other groups?

The return of the National Hockey League and the jets was a significant milestone in the sporting history of Manitoba. The overwhelming success of the sale earlier this summer of Winnipeg Blue Bomber plates also showed that Manitoba sporting fans are receptive to purchase a specialized plate. In 2004, the Province of Manitoba approved the issuing of a specialty licence plate to honour veterans.

How many will be made available?

According to Scott Brown there will be as many available as demand will allow. If there are more than the 9999, the “J” will be removed to add another number, and then the “W” will be removed if necessary.