The Jets winger gets recognized for his play. 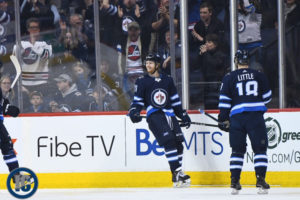 The Jets winger has plenty of reasons to smile as his four goals and two assist in three games this past week which was enough to get him recognized by the NHL as their Third Star of the Week.  Winnipeg is on a roll winning all three of these games and are winners of five straight overall.

The Jets rookie is having an excellent season hitting 50 points last night and is one goal shy of hitting 30 for the season although his 29th last night was good enough to tie him with Brock Boeser for most goals by rookie this season.