It is unclear if Morrissey will play Tuesday night versus Washington 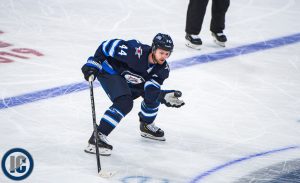 When warm up got underway in Buffalo on Saturday afternoon, defenceman Josh Morrissey was paired with Tucker Poolman but when it came time for puck drop 30 minutes later he had been ruled out of the game according to Jets PR with an upper-body injury.

“Warm up.  It didn’t happen in warm up, but just didn’t get through warm up the way we wanted him to.  We didn’t come to the rink expecting that.  So it was truly last minute.”

Asked if it occurred in Philly on Saturday he added “We’ll look back at it now and ask but he felt fine coming to the rink and didn’t feel fine after warm-up.  So we don’t take those chances.”

Maurice was also asked about his concern:

“Concerned enough that I didn’t play him. So we’ll get a better idea in a couple of days here.”