Updates from Jets coach Paul Maurice on some of his injured players. 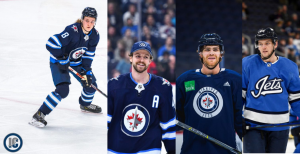 The Jets have quite the laundry list of skating wounded.  Today following morning skate Jets bench boss Paul Maurice provided an update on some of his injured players.

“Trending really well.  We’ll see how he comes back tomorrow.  May lose the gold and get into the blue or red sorry, plays defence and once that happens he might be available for Edmonton.”

“I’m not listing him as day-to-day cause he’s gotta get out of that (non-contact) sweater and get some contact in.  But I would take him off the week-to-week.  It may get to a week but it’s not that far off after that.”

“Would be fairly close then.  He needs just a couple of practices.  Once he gets into the blue (he meant red) there won’t be any turnaround time.  He’ll be available.”

He confirmed that Little has gone for his surgery.

These two round out the list of skating wounded but Paul Maurice didn’t mention them in his availability.