The Jets GM spoke to the media today after the conclusion of the NHL Trade Deadline day.  A day in which the Jets stood pat. 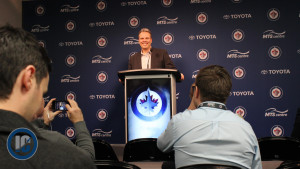 Kevin Cheveldayoff – Has he done enough to get his team into the playoffs this spring?  Recapping his day.  Was he close at any point to making another trade today?  Is he happy with the trades that he has made to date?  Did it play in his favour to deal a few weeks ahead of the deadline?  Looking at the roster today as compared to how it looked in 2011.  Eight pending UFA, did he have any conversations?  Is it a new stage for the organization as they move past draft and develop?  Are they past stage where they fill one hole, and this creates another?  How much does he watch other teams and what they are doing during this time?  His thoughts on the state of the Western Conference.  At what point during this season did he recognize what the team was doing and decide that it was important to be a playoff team this year?  On players getting a taste and wanting to be a part of the organization. Is it difficult letting go now that the deadline has passed?  How committed is he to signing Michael Frolik?  Is he actively trying to sign him?  What is he expecting from Stempniak and what are his thoughts on what he can bring to the team?  Is there anything that he would have liked to have gotten done that he wasn’t able to do?  Is he pleased with what Myers has shown so far?

– Opening comment “While we didn’t get anything done today there are some conversations that we file away for later.”

– On a conversation he had with Jets coach Paul Maurice today: “Are you comfortable where we are at?” Maurice’s answer: “Ya, let’s go”

– On speaking to Michael Frolik’s agent today. Said they were NOT trading Frolik. Didn’t want any misconceptions out there.

– On watching the moves made by other teams: “you watch them to help ascertain asset value. You don’t build to compete with one team”

– On when he recognized they could be a playoff team: “I don’t know if there was any one ‘a ha’ moment. It is based on the body of work”

– On Stempniak: “Lee is someone who can play up and down the lineup. I know he is really excited to be joining our group”.

– On the injuries “We weathered some difficult times. We lost four or five defenceman but we continued to compete.”