On whether there is a temporary feel to the room with all the UFAs. 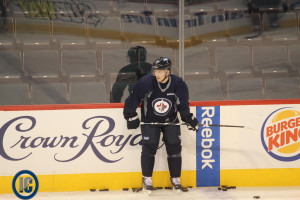 The Jets have a number of UFAs currently on the team including Drew Stafford, Jiri Tlusty, Lee Stempniak, Anthony Peluso, Adam Pardy, Michael Frolik and Jim Slater.  Today in his scrum with the media he was asked if it gave the team a “temporary feel”.

Coach Maurice:  “You get the right kind of guy.  Drew came in really excited to be here.  He also knew a bunch of the guys and he’s playing hard and playing well for our team.  We want, and only want players that want to play in Winnipeg and we’ve got big chunk of them now.  Big course of guys that don’t mind if it is -15 but that’s because they like being in the city, like being in this room, that’s really important to us.  So now you get some guys who are UFAs and they get to be in our room and see the good things about Winnipeg, the people.  I think it is easier than to convince those guys to stay.  They are coming into a positive environment.  We’ve got a great fan base here.  It’s harder to maybe convince a player who comes in once or twice a year in July that this is a place that you want to be.  We get these guys in, we get them in a good room, they love playing hockey.  They will buy a thicker coat.  It will be alright.  They will like playing here.  It’s good for us.

You can hear his response as well: