A chat with the Jets GM. 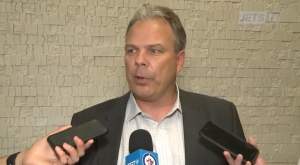 Kevin Cheveldayoff scrum topics:  Rule changes.  Was there consensus?  Does he know what the cap is?  Frustrating to operate under that circumstance?  Where is his stress level?  What is the sense he’s getting from other GMs regarding trades and does he expect it to be a busy few days?  Does he expect when one RFA signs the ball will drop and others will follow suit?  A different crop of RFAs.  How much lead time did he have to know that the cap would be lower?  How does it change his week?  Does he expect the RFAs to sign by July 1st?  Does he feel like he’s making progress with his RFAs?  Is it holding up his other moves?  Of all the rule changes that were discussed does one intrigue him personally?  What are the benefits to drafting 20th?  Does anything change in their approach?  Challenges to the Jets back end.  Does his time in Chicago help with what he is dealing with now in Winnipeg?  How many prospects has he met with?