The Jets GM spoke to the media today as he got Zach Bogosian, the last of his Big 3 RFAs, signed to a long term deal.

The Jets GM spoke to the media today as he got Zach Bogosian, the last of his Big 3 RFAs, signed to a long term deal. 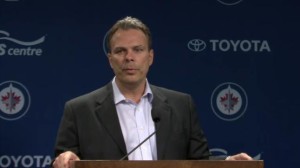 – Since season ended we’ve had many meetings to decide which direction to take the team. How to take it to next level.

– When five players filed for arbitration, people wondered what was going on here, but it is part of the process

– If you look at the players we signed here this summer, they are all around the same age. We need to keep growing and pushing

– “How close are we? I don’t know. You have to see the product on the ice. Ownership has shown a commitment to this team”.

– “I like the relationship Zach has with Charlie Huddy. I like his worth ethic. All aspects of his game are going to help this team”.

– It is a little bit of a down time (now in the NHL). Conversations will start to pick up again later in August.

– There are some players from this past draft that we will have to sign to contracts.

– Fans in Winnipeg should know that Mark Chipman and David Thomson are committed to building a winner in this city.

– One thing we knew is that these players (ones going to arbitration) were committed to being in this city long term.

– “No wins or losses happen in June, July or August. It is when the puck drops that the evaluation truly begins”.

– “The magnitude of his (Byfuglien) impact is probably still not known. A lot of untapped potential.”

– Ended the teleconference talking about Evander Kane not being invited to Team Canada orientation camp and Wheeler’s invite for USA.