When the Moose held their end of seasons interviews back on April 18th one of the players we spoke to was Thomas Raffl who dealt with a laundry list of injuries including separating his collar bone/broken rib (in game one) then broke his jaw and then ended the year with a lower body injury.  He did take a positive view indicating “I think I got a whole lot of the injuries out of the way this year!”. 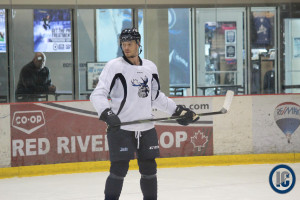 While he wasn’t sure what his plan was for this upcoming season it was clear that he wanted to play in the NHL to realize the culmination of what has been a dream since he was a kid and what has taken him 13 years as a pro.  When asked if he thought he still had a shot to make it in the NHL “I proved I could play in that league.  I proved that I could keep up with the guys in the NHL.”

“I want to play in the NHL until the day I quit” was how he responded when it was mentioned that he was without an invitation or contract to play next season.

In the free agent frenzy scrum on July 1st with Jets general manager Kevin Cheveldayoff when he was asked about Thomas Raffl he said “I think we will move past that and give the opportunities to the guys we signed today but also to the young players that we have within the organization that have taken steps and are moving towards spots at the National Hockey League level.”.

Update:  Thomas Raffl has signed with his old team Salzburg in his native Austria for next season.  It appears his NHL dream is done.