Winnipeg Jets fans may be wondering: Who is Patrik Laine?

A closer look at the prospective 2nd overall pick.

The Winnipeg Jets got a massive boost on Saturday, April 30, when they became the owner of the 2nd overall pick in the 2016 draft. With American forward, Auston Matthews looking like the consensus 1st overall pick, it’s likely that the next best prospect available on June 24th in Buffalo will be Finnish forward, Patrik Laine.


Who is Patrik Laine

Patrik Laine is both a power forward, and a sniper. The big left winger – who stands 6’4, 209 – can beat you in several different ways. To say that he has a great shot is not doing it justice – he has a phenomenal shot. He has the rare ability to beat a goalie from far out, similar to current NHL snipers, Vladimir Tarasenko, and Alex Ovechkin. His wrist shot from the slot is off his stick in the blink of an eye, and it’s terrifyingly accurate; he also has a devastating one-timer, which he frequently uses on the powerplay to further victimize helpless goaltenders. He also has the ability to take a defender wide and drive to the net, using a powerful stride, size and reach to protect the puck, and quick hands around the net to finish those plays off. And while there’s no doubt that he’s a goal scorer, he isn’t one-dimensional – he’s a good passer, who knows how to use his teammates, and he even shows some determination on the back-check. (See World Junior highlights below regarding passing and back-checking). 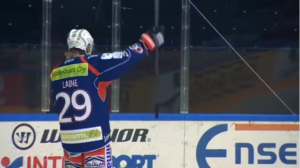 Laine just finished a remarkable season in Finland’s top men’s league, the “Liiga”. During the regular season, he scored 17 goals, along with 33 points in 46 games, placing him fifth in team scoring, and 37th in overall league scoring. Those are great totals for a player who was just 17 years of age during the season, (he turned 18 on April 19), but he was just getting started. In the playoffs, Laine lead the league in goals, and set a record for most playoff goals ever by a teenager, with 10. He was even named Liiga playoff MVP – by comparison, the last 17-year-old to take home playoff MVP honours was: no one ever. Teenagers rarely dominate the top men’s leagues in Europe to this extent, regardless of how highly touted they are as prospects. (Whether it be the Liiga in Finland, the Swedish Hockey League, or the KHL (Russia), this is incredibly rare).

Laine also put together a magical run at the World Juniors this season, leading that tournament in goals, with 7. He scored two goals against Canada in the quarter-finals, including the back-breaking, powerplay game-winner on a one-timer late in the game. He then made his presence known in the gold medal game against Russia, scoring the tying goal early in the 3rd period on an absolute bullet of a shot, high, short-side.

While the best style comparisons for Laine probably lie outside of his country – he is similar in some ways to Russian sniper Ilya Kovalchuk (though not as dynamic), it’s worth noting what some of the all-time greatest Fins were doing at the same age. The best Finnish forwards of all time are Teemu Selanne and Jari Kurri, while some other great ones were Olli Jokinen, and Saku and Mikko Koivu. At 17, Kurri scored 2 goals in 29 games; Mikko Koivu had no goals in 21 games, while Saku started out when he was 18, and scored just 3 goals in 46 games. Olli Jokinen scored just 1 goal in 15 games, while Teemu Selanne didn’t even play in the league until he was 19 (4 goals in 11 games). While none of this means that Laine is a more talented prospect than any of those Finnish greats, it does provide some context for how impressive he has been at such a young age.

More recently, the best prospects to come out of Finland have been Alex Barkov, and Laine’s WJC teammate, Jesse Puljujarvi. At 17, Barkov had 21 goals and 48 points in 53 games in 2012-2013 – putting together the most impressive regular season from a 17-year-old in the Finnish league. While he actually bettered Laine’s regular season, he was only able to manage 5 assists in the playoffs that year, with no goals, so Laine still has him there. (Barkov has since become a top-flight NHL centre, and has been one of the driving forces behind Florida’s rise up the standings). Meanwhile, Puljujarvi – who was was ranked ahead of Laine by most scouts coming into the season – wasn’t as dominant as Laine in Liiga play, with 13 goals and 28 points in 50 games, and was also outplayed by Laine in the playoffs, as his team was actually eliminated from the playoffs by Laine’s club.

Projecting Laine at the NHL Level

Projecting an 18-year-old, 5-7 years down the road is always a difficult task, and it’s no different here with Laine. Whether he becomes an elite goal scorer, or simply a good goal scorer is anyone’s guess, but one of the great things about him isn’t just his high upside, but also his low downside. Barring some type of career-altering injury, Laine looks like a 25-goal scorer on a bad day, and one that has the potential to be a 40-goal scorer down the road. This season, only four players NHL’ers scored 40 goals – Vladimir Tarasenko, Jamie Benn, Patrick Kane, and Alex Ovechkin.

While the overwhelming majority of players drafted this June will not be ready to play in the NHL this fall, scouts believe that Patrik Laine is one of the few who is. Given his domination of the Finnish league playoffs, there isn’t much left for him to prove there, and the AHL isn’t a big step up from the Liiga. He clearly has the size and strength to play with men, so naturally, the discussion turns to slotting him into the Jets lineup. One word of caution for Jets fans: while he is a one-of-a-kind prospect, he is still just 18, so it’s unlikely that he’ll be the difference between the Jets making or missing the playoffs in 2016-17. Assuming the Jets do get Laine, the real returns on this player will come 2-3 years down the road, and beyond.