A recap of the Moose game 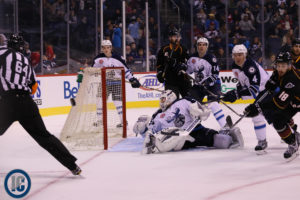 The Moose played their home opener and 3rd game of the season on Friday night at the Bell-MTS Centre. The home club was dominant in the first, controlling play and taking a 19-7 edge in shots, and scoring the opening goal – a Julian Melchiori blast which found its way through traffic. the Monsters came right back in the second and did likewise, out-shooting the Moose 18-6 in the period, and tying the game early off a JC Lipon giveaway. The Monsters took a 2-1 lead on the PP, but the duo of Connor and Roslovic tied it just 33 seconds later, with Connor blazing down the left wing and sending a sweet cross-ice feed to Roslovic in the slot, who buried top right corner. Under a minute later, the Monsters took the lead back, with Hutchinson letting in a weak one – it appeared that he was cheating to his right, expecting a pass across, and instead, a weak shot slid through his legs. The Moose did tie it up at the start of the third, with JC Lipon sending a great stretch pass to Patrice Cormier, who deked backhand-forehand to tie the game at 3. But just 5 minutes later, the Monsters’ Joe Pendoza scored his second of the game, beating Hutchinson on his (right) glove hand off a two-on-one. The Moose weren’t able to mount much of a comeback, partially due to foolish penalties by Lipon and Lemieux in the final 10 minutes of the 3rd.

Jack Roslovic: led Moose forwards with 4 shots on goal (at even strength), and 7 overall attempts (2 on the PP); he had 1 goal, was on the ice for 1 Moose goal, and none against
Kyle Connor: 4 shots on goal (3 ES, 1PP), 5 shot attempts; 1 assist, on the ice for 2 Moose goals, and none against
Sami Niku had an assist (secondary) on the Roslovic goal, was on the ice for one goal for and one against, and had 3 shot attempts (1 on net)
Michael Spacek had 2 shots on goal, and 3 overall attempts, and wasn’t on the ice for any goals for or against
Aside from the beautiful pass to Cormier, Lipon had a tough game; he and Jake Kulevich were the only Moose skaters who did not have a shot attempt on net;  he was on the ice for all 4 goals against (albeit one on the pk), and he took a slashing penalty
Brendan Lemieux had two shot attempts, a fight, and took an interference penalty; he was on the ice for one goal against
Julian Melchiori and Peter Stoykewych led the Moose in shot attempts with 6 each (but only 3/12 reached the net)
LW Jansen Harkins & LW Francis Beauvillier missed tonight’s game; both are day-to-day
D Nelson Nogier is out long-term with a shoulder injury
D Jan Kostalek, D Mark Flood, and LW Darren Kramer were healthy scratches
After winning in his last outing, Michael Hutchinson started his 2nd game in a row; Eric Comrie – who gave up 5 goals in the season opener in Grand Rapids, was the back-up