Winnipeg Jets Dmitry Kulikov given a personal leave from the team

The veteran D man had a personal matter to attend to. 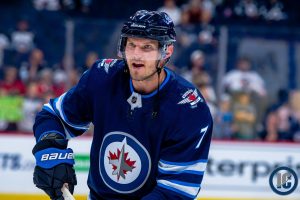 The Jets today made official what coach Maurice indicated to media on Monday, that veteran defenceman Dmitry Kulikov was given a personal leave from the team. According to Ted Wyman of the Sun:

Dmitry Kulikov will not play on Tuesday as he’s gone home to deal with a personal matter. It’s is said to be positive in nature. #NHLJets

As a result the Jets bench boss had indicated on Monday that they would recall Sami Niku and today they announced that move as well as the recall of Nelson Nogier. Veteran centre Bryan Little was placed on IR to maintain roster compliance.