No problems with fans renewing season tickets in Winnipeg!! 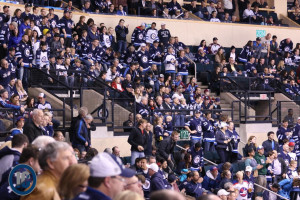 Not a big shocker but fans in Winnipeg cannot get enough Jets hockey as evidenced by the 96% renewal rate.  The Jets just announced that similar to last year’s renewal rate fans in P3, P4 and P5 seats are coming back big time.

That renewal came with a 3% seat price increase as well.

True North Sports & Entertainment and the Winnipeg Jets Hockey Club announced today that over 96 per cent of season seat holders renewed the term of their Ticket Purchase Agreement during the recent renewal campaign for TPA’s expiring in 2014-2015.

True North confirmed that an increased number of seats will be made available to Wait List members for the 2015-16 season. The increase in available seats is due in part to the addition of Loge seating in the upper bowl. Following the completion of this year’s relocation process, Wait List members will be contacted, in June, to confirm available seating options in the MTS Centre upper bowl.

Both current and new season seat holders added from the Wait List can look forward to MTS Centre’s recently announced building enhancements, which will commence this summer. Enhancements include the installation of a new HD Centre Hung Scoreboard and 360-Degree Power Ring, and the installation of new seamless glass in the front row of the 300-level, which will provide improved sightlines for our 300-level patrons.