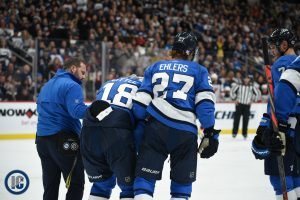 Nine days ago in response to a question about Blake Wheeler Jets coach Paul Maurice may have provided some insight into the timeline for injured veteran centre Bryan Little who suffered a perforated eardrum and was left dealing with vertigo after taking a puck to the head on November 5th:

He was asked following the Jets optional morning skate again about the move of Wheeler to the middle and whether that could be permanent when the team gets healthy, in his response he said “That option is definitely open yes. But that’s two months away or whatever, I don’t know. We’ll see when we get there.”.  Considering the Wheeler move was made as a result of the Little injury it seems fairly clear that the bench boss is referring to the health status of Little.

Today in Detroit he provided a further update when asked about Little:

“He’s getting better.  They’re making a decision still on whether there needs to be a surgical repair on the ear or not.  So they’re waiting for some healing to happen before they make that decision.  And once that decision’s made, and it may take more time before we get to it, then they’ll move on to kind of the next thing.  But he’s back.  He is active.  He is riding the bike at a certain level and that has been increased slightly.  So he is back in our room, kinda starting the process of getting back to playing but I don’t have any timeline for you.”

Asked if he wouldn’t be dealing with concussion symptoms if he was on the bike “that way” the Jets bench boss indicated:

“No.  There wouldn’t be strong ones.  But now in the protocol we put players back on the bike far earlier than we used to.  So even if it was a mild, very light headache he might still go back on it the next day.  So that’s not necessarily an indicator.  He is still going to have to pass the test.  We just didn’t need to have him take the test.  There was no point in it early on because it didn’t change anything that was going to happen with his rehab.”

Which all adds up to is it still going to be some time before Little’s familiar number 18 is back in the lineup.