A look at the game 32 projected lineups and pre-game audio. 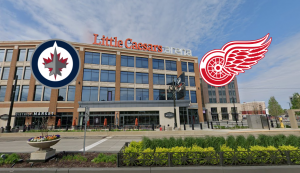 The Jets are in Motown where they will be hoping to sign, seal and deliver another victory over the Wings like we saw Tuesday in Winnipeg.  Of course when you beat a team like Detroit that sits last in the NHL it won’t have Jets fans dancing in the streets but it would allow them to keep pace with the likes of Colorado and ahead of Dallas who both continue to win.

With a trio of Michigan-ites (Hellebuyck, Copp & Connor) on the Jets there should be plenty of family and friends inside Little Caesars Arena this evening as they look to keep Winnipeg cruisin’ with their 10-5-1 road record and keep the Wings looking for a win in Michigan like a needle in a haystack as they’ve gone just 4-11-1 at home.

As per Ken Wiebe of The Athletic Winnipeg he indicates that based on the optional skate he isn’t expecting any lineup changes (aside from Hellebuyck starting).

Coach Maurice:  Play of his squad even when they had a 4-1 lead on Tuesday.  How the 4th line can be effective.  Need to develop chemistry.  Any lineup changes?  Success they’ve had in one-goal games and how it can help in all types of games.  Update on Bryan Little?  Increased challenge of facing a team back to back.  The Michigan contingent on this team.  Something consistent about the Michigan born players?

Jets bench boss Paul Maurice was asked about Bryan Little who still has some healing to do and wouldn’t provide a timeline.  You can read his transcribed quotes about Little here.

Puck drop is at 6:30 PM CST.  Be sure to head over to illegalcurve.com following the game for a recap of the action which includes post-game audio from the Jets room as well as from Coach Maurice.