The Jets captain and two time Stanley Cup winner was the lone member of the Winnipeg Jets organization invited to participate in Team Canada’s 2014 Winter Olympics Orientation Camp in Calgary this summer. 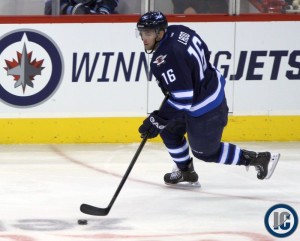 The Jets captain spoke with the media today to discuss his invitation.

– An honour to be mentioned with the same group of players selected.

– My play at the start of the year will determine who makes the team. Just want to give yourself a chance to make the final roster.

– Final goal is to be on the roster for Sochi. Pinnacle for a CDN player to represent Canada internationally at the olympics.

– I was hoping for the invite. Played well at World Championships, so wasn’t surprised but wasn’t taking it for granted.

– Hasn’t been given any insight from the coaches into what I need to do to make the team. Need to continue to play a strong 2 way game.

– My mindset is still going to be to play well to help the Jets, but I think if I play well for the Jets it will help me make the team.

– I was in a bar in Chicago when Canada won the gold in OT at Vancouver 2010.

– Didn’t really think about maybe making orientation camp until after the season and world championship was over.

– Really excited to have Frolik and Setoguchi added to the Jets roster. Setoguchi will give the top 6 more scoring.

– Ken Holland called me yesterday and gave me the news that I was going to be invited to Team Canada Orientation Camp.

– We were told to keep the news on the down low until the official announcement.