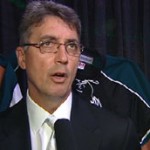 “With a Little Help from My Friends”

The assistant coach is one of the most unique roles in the world of professional sports. Often tasked with great responsibility, they are in the enviable position that rarely do they receive the brunt of the blame, but rather are often singled out for praise for their role in shaping a certain aspect of the team. Whether the assistant coach has direct responsibility for defensive strategy, goaltending, or power play productivity, their impact is often cited as the reason why team X has performed so well in area Y. Conversely, when a team is struggling, most often the blame falls on to the head coach for the failure, sparing the assistant from the most significant amount of public scrutiny.

In Winnipeg, during the first incarnation of the Winnipeg Jets, our assistant coaches for the most part have been fairly anonymous. Sure, some of their names were known by the most hardcore of fans, but for the most part we knew the head coach, and we knew they had assistants, but we weren’t quite sure who they were. The head coach was responsible for the team, and the praise and blame began and ended with him. His assistants were anonymous. (Case in point, the story about the 1989-90 playoffs told by ex-Jets head coach Bob Murdoch during the interview we conducted with him on May 28. Murdoch ended up losing his job, while Alpo Suhonen was just one of many assistant coaches to pass through Winnipeg).

More on the Jets assistant coaches after the jump.

As with anything in life, the impact of the assistant coach has changed dramatically since the NHL left 15 years ago. Once anonymous, the hiring and impact of an assistant coach now results in significant coverage, analysis, scrutiny and conversation among fans both casual and hardcore. When the Winnipeg Jets announced the hiring of Charlie Huddy as assistant coach, and Wade Flaherty as goaltending coach it wasn’t just agate on the sports page as it may have been 20 years ago, it was front page, breaking news and received extensive coverage by all media.

In the case of the Winnipeg Jets 2.0 and their choice of assistant coaches, the decision has been met with praise. A rookie (NHL) head coach in Claude Noel tabbed Charlie Huddy, an experienced, consummate professional, to man the role of assistant coach. On its face, the marriage of Noel and Huddy seems to make perfect sense, as Huddy can act as an experienced voice that Noel can use to bounce ideas off of, and to get advice from, throughout the trials and tribulations of the long NHL season. In terms of on-ice impact, the Winnipeg Jets young, talented, defensive corps will be molded and tutored by a 14 year NHL defenseman who has spent much of the last decade tutoring defenses, and being the right hand man of head coaches throughout the NHL. It’s a hiring that simply makes sense—both for what he will do for the Jets defense, and for the steadying influence and advice he will provide to coach Noel.

In terms of the goaltending coach, the Winnipeg Jets stayed to form and hired someone that the organization is very familiar with. Wade Flaherty has played in Winnipeg, as a member of the Manitoba Moose, and most recently was tasked with working with the goaltenders in the Chicago Blackhawks organization where Jets GM Kevin Cheveldayoff bore witness to the work that Flaherty was doing. Another area in which the Jets are considered strong, with Ondrej Pavelec expected to be the starting goaltender for the foreseeable future, Wade Flaherty will help ensure that Pavelec continues to develop as expected, and will also impart his wisdom gleaned from an almost 20 year professional hockey career. A veteran who has been through the “wars”, educating a younger player who has more talent than the veteran ever possessed–It’s another hiring that just makes sense.

The Winnipeg Jets are still expected to add another name to their coaching staff in the coming weeks. As has been discussed, the defense and goaltending seem to be in good hands, under the oversight of head coach Claude Noel. In the coming weeks I would expect the team to round out the coaching staff with a hire of a coach who should focus the bulk of his time and energy on the team’s forward corps—the area that most experts/pundits point to as the Achilles heel of the team. While the name of Winnipeg native Mike Keane has been bandied about, this is not the role I would expect to see him occupy with the team. Nor should this be his role, given his inexperience as a “formal” coach. The Winnipeg Jets would be wise to employ Mike Keane in some capacity, given his pedigree, but he isn’t yet suited to be the 2nd assistant of an NHL team.

The NHL season is a long grind, filled with ups and downs, emotional highs and emotional let downs. Winnipeg Jets head coach Claude Noel is going to have to rely on his assistants throughout the season to help him through those times when the lows are more prevalent than the highs, when the grind is taking its toll. As the Beatles so eloquently sang, he’s going to have to “get by with a little help from my friends.” Fans can only hope that the partnership of the Winnipeg Jets coaches is as successful as that of The Beatles, and Yoko Ono never rears her ugly head behind the bench of the Winnipeg Jets.