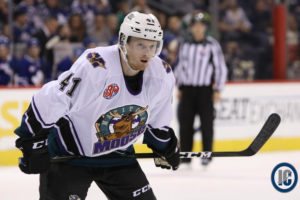 The Jets had to make one more move today to have a 23 man roster ahead of the 4 pm CT deadline and with Andrew Copp proving to be healthy the team has assigned Kyle Connor to the Manitoba Moose.  This gives the Jets a 23 man roster with Matt Hendricks being placed on the injured reserve.

While Kyle Connor certainly has more skill than some of the players left with the Jets the writing was on the wall the last couple of days with him skating as the extra forward.  Of course, the move to the Moose will give him the opportunity to continue to hone his game and if he is able to continue doing what he did last season with Manitoba, it will only be a matter of time before he is up with the big club.