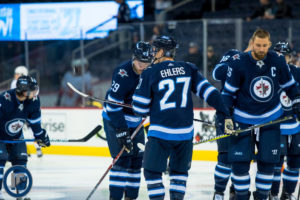 With Kyle Connor being assigned to the Manitoba Moose today the Jets got their roster down to 23 as they also added Matt Hendricks to the IR after he blocked a couple of shots in the pre-season game against the Senators on September 27th.

The Jets started training camp in mid September with 53 players on the roster.

Last season saw a glut of young talent join the fold to kick off the 2016-17 campaign including Patrik Laine, Kyle Connor, Josh Morrissey and Connor Hellebuyck.  This time around Andrew Copp, Marko Dano and Nic Petan who all spent time with Winnipeg but began the year with the Moose in the AHL will have the opportunity to begin the season with the Jets.  One new prospect to join the fold will be “local kid” Tucker Poolman (from nearby East Grand Forks, Minnesota) who the Jets drafted in the 5th round (127th overall) back in 2013.