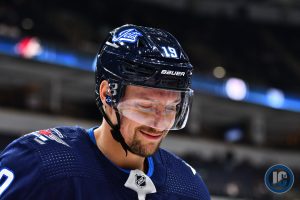 It was generally assumed that once David Gustafsson‘s run with Team Sweden at the World Junior Tournament came to a conclusion he would head back home to Sweden to play with HV71 Jonkoping.  However Jets GM Kevin Cheveldayoff indicated in an interview on December 30th that because the Jets 2018 second rounder played with Winnipeg past December 1st he was eligible to play in the AHL with the Manitoba Moose.  He added that it would be a conversation they would have with Gustafsson and his representatives once the Tournament concluded.  Sweden took home the bronze medal after Gustafsson and his teammates took out fellow Jets draft pick Ville Heinola (2019 1st rounder) on January 5th.

Today Jets coach Paul Maurice has announced that Gustafsson will be assigned to the Manitoba Moose.  His addition will be a big boost for the AHL squad who could use him up the middle.  And in case things go off the rail with the Jets he will be right down the hall in case they have need of a recall.

When asked about having the prospect close at hand the Jets bench boss indicated “I just think (Moose coach) Pascal Vincent does such a wonderful job with those young players and getting them ready to play the game that we play.  Giving them individual attention.  When we bring these kids up they’re not behind systematically.  They’re right on it.  We’re excited that he’s willing to stay and we wanted to have him there.”

Worth noting that the prospect didn’t have to go to the AHL.  You’ll note in the quote above from coach Paul Maurice he says “….We’re excited that he’s willing to stay”.  The additions of Gustafsson and Logan Shaw (if he clears waivers) will be a big boost for the Moose.

Paul Maurice on the assignment