The season is around the corner and will get underway with the Rookie Showcase tournament. 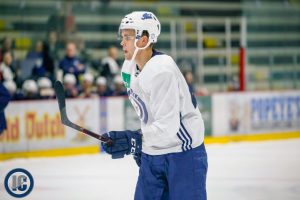 With August almost concluded it means the 2019-20 season is inching closer and closer.  It gets underway with the Rookie Showcase tournament in Belleville, Ont. from Sept. 6 – 9.  The Jets today have announced their roster as well as game dates/times.

The IcePlex announced that the team will practice on Thursday, September 5th at 11 am before they depart out east.

Update:  Goalie Mikhail Berdin and forward Skyler McKenzie are not participating due to injury and have been replaced by goalie Adam Carlson (who the Moose signed) and James Phelan (played first year pro last season for Texas in AHL) have been added to the roster.

The players the Jets have drafted are noted above.  In addition to these guys Finnish forward Joona Luoto, whom they signed this summer, is on the roster as are a number of players who have spent time with the Moose (AHL) or Icemen (ECHL) including:  Hayden Shaw, Kamerin Nault and Kristian Reichel.

Once this tournament wraps up you can expect to see a number of these players back in Winnipeg for training camp.  And a number of the pros will continue their development in the AHL with the Manitoba Moose.