All work, no play for Jets as they eye playoff spot. Little out for Jets against Islanders. Jets making most of home-heavy stretch. Jets game day post-practice audio. 2011 NHL Entry Draft Prospect stats. A hero’s welcome for Selanne.

Globe and Mail:  Noel takes a pass on Habs’ coaching controversy.  The Jets bench boss had 1 main message today and it was about consistency.  He didn’t want to focus on bounce back games or other media generated concepts.  He just wants his guys to play consistent hockey within his system.  He feels if they do that they will be in a good position to win the game.

Winnipeg Free Press:  All work, no play for Jets as they eye playoff spot.  If the Jets are serious about making a post-season push, then the next 3 games in 4 nights might be the biggest test for the team all season long.  While they have been fantastic at home in December (6 wins 1 loss), they need to take advantage of the MTS Centre crowd because come January, they will not have access to as much ‘home cooking’.

TSN:  Little out for Jets against Islanders.  Coach Noel said during his press conference that Little wouldn’t likely be a player tonight so this news doesn’t come as much of a surprise.  He has been incredibly effective on a line with Kane and Wheeler and it will be interesting to see how Burmistrov fits in on the top line. 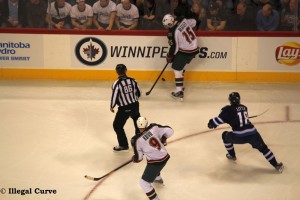 CBC:  Jets making most of home-heavy stretch.  As I said above, with the Jets on the road for most of January, taking points at home is critical for any post-season aspirations.

Illegal Curve:  2011 NHL Entry Draft Prospect stats.  If you are curious how Mark Scheifele has done with the Barrie Colts or Adam Lowry with the Swift Current Broncos, we have updated the stats for the entire Jets 2011 draft class as of last night.

Orange County Register:  A hero’s welcome for Selanne.  And you thought the Selanne chatter had died.  Not likely.  The Finnish Flash is still basking in the glow of the game on Saturday.

Winnipeg Sun:  Warm welcome for the pride of St. Malo.  Travis Hamonic now has 0.0067 of the building cheering for him tonight.

Winnipeg Free Press:  Grabner looks forward to playing against Jets tonight.  He spent 3 seasons as a member of the Manitoba Moose before he got his chance in the big leagues and took the league by storm after he was claimed by the Islanders from the Panthers.