Winnipeg Jets Official Site:  Jets Journal – time on our side.  A look at today’s practice at the IcePlex as well as a Randy Jones update.

Winnipeg Free Press:  Jets no. 1 netminder Ondrej Pavelec happy he’s seeing lots of action.  Both the Jets goalies are hard workers and are happy to get as much action  in net as they can. 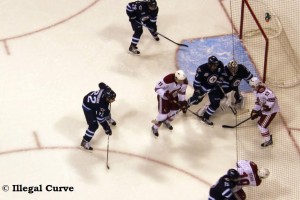 The Lac Du Bonnet Leader:  Charity effort ends in scam.  Luckily the money didn’t go to the scammer, instead going to Cancer Care Manitoba.  Hopefully this situation can be rectified so they can still have the draw for the tickets.

Star-Ledger:  Devils’ Adam Henrique edged by RNH for rookie of the month award.  Jets fans should remember Adam Henrique as he scored 2 goals when the Jets visited Newark, including the game-winner in overtime and was named the 1st star of the game.

Star-Ledger: Travis Zajac will miss Winnipeg but Johan Hedberg returns. Feel badly for the Winnipeg born and raised Zajac who had this date circled on his calendar and now won’t even be in the building. Johan Hedberg says some nice things about the Peg’. Expect him to get some cheers when announced as starting goalie on Saturday night.

ESPN New York:  Right now, Devils just an average team.  Much like Phoenix team the Jets beat last night, the Devils boast a strong PK (1st in league) but a below average PP (26th).  The Devils sit 1 point ahead of the Jets with 2 games in hand and take on the 1st in the West Minnesota Wild tonight in St. Paul.