Winnipeg Free Press:  Jets gird up to face Stanley Cup champions.  Perhaps the biggest test for the Jets in the last few weeks is how they respond to a game against the sizzling hot Cup champs.

Winnipeg Sun:  Jets set to face defending champs in Boston.  Should be a good goaltending duel between Pavelec and Thomas.

Winnipeg Free Press:  Jets broadcaster visits former Bruins teammates.  I didn’t realize that Hnidy’s name didn’t go on the Cup. While I’m sure he would have liked to have seen his name be immortalized on the Stanley Cup, given the size of his Cup ring, it isn’t exactly too bad a prize. 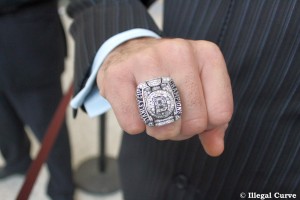 Winnipeg Sun:  Jets have a solid backup plan.  Mason is one of the hardest working Jets players at practice and despite being without NHL game action for over a month, played a pretty solid game for the Jets in relief of Ondrej Pavlec.

Winnipeg Sun:  Jets captain carrying load.  Scoring a memorable game-winning goal (his 100th) against one of his closest friends (Cam Ward) had to be quite the experience for the Jets nonsense captain.

ESPN:  Mixed feelings for Stuart, Wheeler on Cup.  Has to be extremely difficult on Mark Stuart who spent almost 6 seasons with the B’s before he was dealt to Atlanta.

Winnipeg Free Press:  Bruins’ centre has kind word for Jets coach.  Always interesting to hear what a player who formerly played for coach Noel has to say about the positive attributes the Jets coach possesses.

Masslive.com:  Bruins look to continue point streak against Jets.  How will the Jets do as they get set to meet the red hot Bruins in the first of four contests this season?