Winnipeg Free Press:  Jets head to New York without Enstrom.  Looks like they won’t have him available for the remainder of the New York road trip.

Icethetics:  Jets 3rd jersey concept – bridging the gap.  I think fans would be very happy if this became the Jets 3rd jersey.  Jacob was successful in his idea becoming the Senators 3rd jersey so why not in Winnipeg as well.  We want to know your thoughts on his innovation. 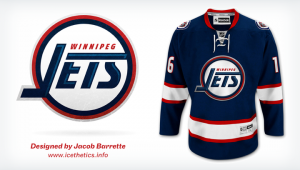 Jets Nation: Wellwood might have found a home.  He seems to have overcome the early season criticism.  His play has been well above the amount he is being paid by the Jets.  The only forwards he makes more money than are Kenndal McArdle and Tim Stapleton, yet he is currently 3rd on the team for points.

Arctic Ice:  Jets scoring chances statistics.  Our friends over at Arctic Ice have crunched the numbers through 7 games.

The Telegram:  IceCaps put the bite on Sharks.  The team finally got a win after a bit of a losing streak.  A recap of the game in which they beat the Worcester Sharks 6-3.

Newsday:  Capuano sticking with goaltending trio.  Subscription required to read full article but doesn’t appear that we know yet who will be facing the Jets.

New York Times:  At some Islanders games, memories etched in ink.  I would prefer to take pictures to have a memory of my time taking in a hockey game but some people want to take it to another level.

New York Times:  Tavares contract extension – how it got done.  If you are interested in how the got the deal done here is an interesting video to watch.