Noel keeps his eye on the prize. Jets heading out on longest road trip of the year. Back in Barrie, Scheifele savours memories with Winnipeg Jets. Law of Torts – Grab the points, get the hell out. Girardi a rock in front of goalie Biron.

Winnipeg Sun:  Canadian Forces love their Jets.  Nice picture of the troops but looks like True North needs to get them some Jets 2.0 gear.

Globe and Mail:  Noel keeps his eye on the prize.  There wasn’t any sign of panic in today’s press conference.  Coach Noel has an even keel approach that shows him not getting too high after a win and too low after a loss.  This doesn’t indicate that there isn’t an urgency or understanding that this team needs to win, just that the coach won’t allow panic to impact his decision making.

Winnipeg Free Press:  Jets heading out on longest road trip of the year.  Fans won’t be seeing the Jets again until the 10th of November so hope they got all the cheering out of them.  Good news for Jets fans is that Jim Slater of the GST line should be returning to the lineup. 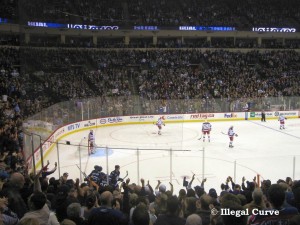 The Hockey News:  Back in Barrie, Scheifele savours memories with Winnipeg Jets.  Interesting that he won’t be returning to the top line but if you are Hawerchuk it is difficult to break up a unit that has the most points in the OHL this season.

Winnipeg Free Press:  Law of Torts – Grab the points, get the hell out.  The Jets certainly couldn’t catch a break after all the sustained pressure they applied to the Rangers.

Winnipeg Free Press:  Girardi a rock in front of goalie Biron.  He may not have been a 3 star selection last night but as IC’s Richard Pollock said to me yesterday he does all the little things that a coach loves.

Winnipeg Free Press:  He fulfills dreams of young Jets fans.  Gone are the days a kid could ride to 7-11 and buy a ticket for $7 to go see the home team play.  Now it costs a lot more and it is initiatives like this that allow those who cannot afford the tickets, the ability to check out the Jets 2.0.

Delaware County Times:  Flyers shuffle defence.  It was an unfortunate incident last night which resulted in Pronger ‘s eye injury, but should be a benefit to the Jets.