Carcillo ready for Blackhawks debut. Ladd eager to hit the ice. Jets set for tilt with Blackhawks. Do away with Divisions. Small chance Crosby could play in Winnipeg on Monday. The ‘Finnish Flash’ remains strong, even at 41

CSN Chicago:  Carcillo ready for Blackhawks debut.  I don’t think the Jets are going to have a tough time with Carcillo, although his linemates in Kane and Hossa could prove more problematic.

Winnipeg Free Press:  Ladd eager to hit the ice.  The Jets will fondly look back on this relative lull in the season when December hits and they play 13 home games. 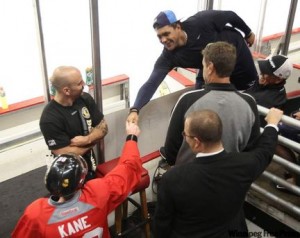 Winnipeg Sun:  Jets set for tilt with Blackhawks.  Coach Noel is demanding a better performance from his troops after Sunday’s 5-1 home opener loss to the Habs.

The Hockey News:  Do away with Divisions.  When this all gets settled, count me as one who will be extremely interested as to how the NHL sorts this mess out.  What are your thoughts?  Should the NHL eliminate divisions?  What format should be adopted?

Winnipeg Sun:  Small chance Crosby could play in Winnipeg on Monday.  When it was announced that he had been cleared for contact, Peggers everywhere took notice as there is a chance he could play in the Peg as the 1st game in his return.

Los Angeles Daily News:  ‘The Finnish Flash’ remains strong, even at 41.  Now that the Home Opener has been played, this is easily the most anticipated game on the Jets calendar for the 2011/12 season.