Toronto Star:  Maple Leafs gave Winnipeg permission to use leaf in logo.  A good move by the Leafs as sales of NHL team merchandise helps fill the league coffers.

Winnipeg Sun:  Kane rested, ready to score.  With the lack of scoring the Jets have seen, perhaps a return to the friendly confines of the MTS Centre is what this team needs to regain their mojo.

Globe and Mail:  Questions surrounding Evander Kane injury.  The problem with concussions is you sometimes do not know when the occur.  Hopefully he is back to 100% health moving forward.

Illegal Curve:  Coach Noel press conference.  Wide ranging presser covering Kane/Stapleton injuries, discussed Kane’s linemates and expected playing time.  The manner in which he motivates players.  Talks about Wellwood’s maturity.  Expectations of the Leafs and much more. (will be up soon)

Winnipeg Free Press:  Jets logo seems to be everywhere.  You go the gas station you see Jets lighters or now the Free Press Jets medallions.  Every store in the city seems to carry some sort of Jets merchandise.  While I haven not eaten a Jets waffle just yet, they do look quite tasty as did the donuts. 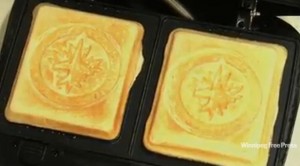 Toronto Star:  Jonas Gustavsson expected to start against Winnipeg Jets.  The fans of James Reimer making the trek from Morweena, Manitoba can’t be happy with that news.

Toronto Star:  Five questions for tonight’s Leafs/Jets game.  All things to be aware of before the tilt tonight between the 7th place Leafs and 10th place Jets.