Winnipeg Sun:  Don Cherry says Evander Kane claims are ridiculous.  Cherry has had Kane’s back but now feels the Jets young power forward needs to grow up.  What do you think?

Winnipeg Free Press:  Noel says more ‘A’ games needed from players.  The beauty of Claude Noel is he isn’t afraid to speak in plain terms and he stated today in pretty clear language that he expects improvement in this team.  He feels like he can win with this squad but it will require a better collective effort.

Winnipeg Sun:  Bogo a game time decision.  Coach Noel knows that it won’t be easy to just ease him back into the lineup.  Bogosian hasn’t played a competitive game since the Jets 2011-12 season ended and he will be full throttle when/if he gets the call against the Penguins.

Jets official site:  CBC 60th Anniversary – Don Cherry look-a-like contest.  The Contest began yesterday and ends this Friday at Noon.  To enter visit the Winnipeg Jets Official Facebook Page and post your best Don Cherry Look-a-like photo on the wall.  The winner receives two lower bowl tickets to the game against the Pittsburgh Penguins on Friday night and a bunch of other prizes.

Illegal Curve:  Coach Noel post-practice presser.  Andrew Ladd had a maintenance day.  Zach Bogosian will be a game time decision but looks ready to go.  Montoya is probably week-to-week.  Miettinen remains week-to-week.  Tangradi addition.  What would keep him from putting Bogosian into the lineup?  If he plays, what would he expect?  Talk about Pasquale.  Evander Kane talk regarding The Hockey News article.  Where does his team stand at the 1/4 pole of the season?  Having patience.  Striving for success.  Playing the right way.

Illegal Curve:  Player audio from the MTS Centre.  Zach Bogosian addressed his recovery from injury and his eagerness to get back into the lineup.  New call-up Eddie Pasquale spoke about getting ‘the call’, excitement at being in the NHL and his game. 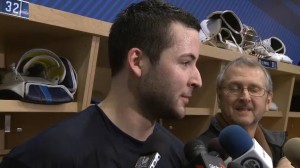