Winnipeg Free Press: Perreault on Jets’ Music City foes: ‘We don’t really like them, they don’t like us’. (Paywall). One thing about Perreault is he certainly doesn’t hold things back. His honesty and candor can be quite refreshing in a world of cliches.

TSN: Perreault accepts new role on Jets’ fourth line. One thing about #85 is you will never hear him complain about his spot on the team or his usage. He is a competitor and obviously wants to play but you won’t hear him complaining. 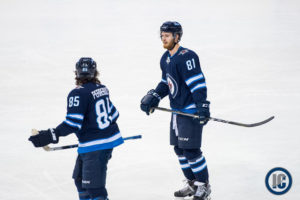 The Tennessean: As rematch with Winnipeg Jets looms, the Predators’ ‘Regular Season’ banner continues to be ridiculed.  I didn’t realize that they got that badly torched for that third banner.

Illegal Curve: Jets vs. Predators pre-game report. The Jets skated today in Nashville as they got ready to face the Predators at Bridgestone Arena tonight at 7 pm. Includes projected lines, D pairs, starting goalies as well as a scrums with Mark Scheifele and Joe Morrow.

Illegal Curve: Coach Maurice pre-game. Topics included – On the Jets/Predators rivalry.  Did they need a playoff series for it to develop.  On Scheifele’s development as the go to guy.  500th NHL game for Mathieu Perreault.  How much has moving to the wing helped Perreault?  Status of Nic Petan?