Winnipeg Free Press:  Jets expected to be part of NHL’s showcase games in Finland next season.  (Paywall).  Get ready to book your tickets to Finland folks as the Jets and Hurricanes look to do battle next season in a place many folks in Manitoba have a fondness for and we know they will be excited to see all the talented Finnish players including phenom Patrik Laine. 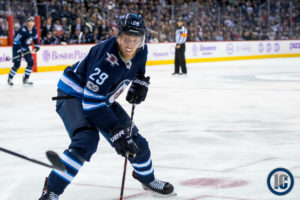 Winnipeg Sun:  Healthy Ducks will provide stiff challenge for banged-up Jets.  The shoe is on the other foot this time around as these two teams do battle in Southern California.  Ted sets up the game with this game preview.

Winnipeg Sun:  Jets assistant GM Simmons on why you can’t compare Atlanta expansion to Vegas.  The Jets assistant GM offers his perspective on what it was like for the Atlanta franchise out of the gate and how it looked compared to the way Vegas has taken the NHL by storm this season.

Orange County Register:  Scoring is how Ducks’ Corey Perry wants to respond to new role.  While he may be seen as a villain by many Jets fans (and likely some players, hello Mathieu Perreault) it is still a surprise to see that the talented forward has been dropped down to the 4th line in Anaheim.

Illegal Curve: Jets vs. Ducks pre-game report. Take a look at what happened at the rink this morning as Winnipeg gets ready to face Anaheim at Honda Center tonight with a pre-game chat with Patrik Laine, Matt Hendricks and Josh Morrissey.

Illegal Curve: Coach Maurice pre-game scrum.  Status of Enstrom/Kulikov?  Does Chiarot draw in?  Thoughts on the Ducks?  On what Henrique has done for Anaheim at centre?  On the Ducks using Corey Perry on the 4th line.  How has Chiarot handled his seventh defenceman role?  More on Kulikov.  Any forward changes?  Was he surprised by Armia’s two goals last game?  On the leap that Hellebuyck has made this season.  On who Chiarot will be paired with.

TSN 1290 Winnipeg:  Chemistry with Trouba growing through season.  Jets defenceman Josh Morrissey joined the Big Show to talk about the rough and tumble game in San Jose, what it’s like being on the ice protecting a late lead and how well he’s progressed alongside Jacob Trouba this season.