Winnipeg Sun:  Playing with Jets has been more than Kulikov hoped for.  This relationship started off slowly but he has become a big part of the squad on the back end.

Winnipeg Free Press:  After winning weekend, Jets looking to reel in Sharks.  (Paywall).  Both teams have won once at home and the Jets are looking to keep their winning streak alive during their California road trip.  Mike looks ahead to tonight’s game.

Winnipeg Sun:  Sharks players apologetic for making disparaging comments about Winnipeg.  Count me as someone who wishes the players would have stuck to their guns and said “I’m not sorry”.  While I’m somewhat kidding the reality is what else are they going to say at this point?  My preference would have been nothing since I think it is a non-story but if you’d like to read what the players in question said today here you go.

San Jose Mercury News:  Three things to know.  A look ahead to tonight’s game from someone who covers the Jets opposition (and also happens to be a former Winnipegger) in Paul Gackle including: 1) Winnipeg Jets share their opinions of San Jose. 2) Ehlers and Timo Meier formed a potent one-two punch in junior hockey. 3) Aaron Dell will get his third start in four nights.

Yahoo Sports:  Jets reaping rewards after buying into team defense.  No doubt that a health D corp this season has certainly helped the Jets make a big jump in the standings as well as a general buy in from the team as a whole of the importance of playing a full 200 ft game. 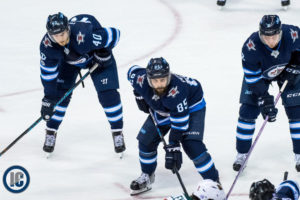 Illegal Curve:  Jets vs. Sharks pre-game report. Take a look at what happened at the rink this morning as Winnipeg gets ready to face San Jose at SAP Center tonight with a pre-game chat with Blake Wheeler and Tyler Myers.

Illegal Curve: Coach Maurice pre-game scrum.  Thoughts on the way the teams have played in the first couple of games. Adam Lowry update. Assessing Dmitry Kulikov. What are they building on at this point in season which will serve them well later in season? Uniqueness of coming off five-day break and then going into an All-Star break. Will he run his bench any differently these last two games before All-Star break? Looking at the scoreboard lately with respect to the central division.

TSN 1290 Winnipeg:  There’s a lot going on in Winnipeg.  Bay Area News Group Sharks reporter and Winnipeg native Paul Gackle joined host Kevin Olszewski to preview Tuesday’s Jets-Sharks game and tells us about an article he wrote about a recent trip to Winnipeg after a war of words between some Sharks players and his hometown.