Note II:  Big news today was that Dustin Byfuglien is week-to-week with a lower-body injury, Tucker Poolman comes into the lineup, Steve Mason was taken off injured reserve and Eric Comrie was assigned back to the Moose.  For more click here.

Winnipeg Free Press:  Poolman in tonight; Byfuglien out at least two weeks.  (Paywall).  It has been awhile since Tucker Poolman played some hockey.  His last game was November 17th when he suited up for the Moose and his last Jets game was October 17th.  Mike sets up the action. 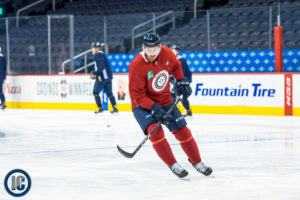 Illegal Curve:  Jets vs. Canucks pre-game report.  Take a look at what happened at the rink this morning as Winnipeg gets ready to face Vancouver at Bell MTS Place tonight with a pre-game chat with Adam Lowry and Josh Morrissey.

Illegal Curve:  Coach Maurice pre-game scrum.  Status of Dustin Byfuglien.  Poolman goes in.  Does he have troops to weather storm without Byfuglien/Enstrom?  Update on Steve Mason.  On the Jets schedule and lack of practice time.  Thoughts on the 2nd line.  With he put Trouba into the first power play unit?  On Trouba’s ability to get his shot through from the top.  Growth in the game of Andrew Copp.  What do they lose when 33 isn’t in the lineup?  What was missing from Ben Chiarot’s game in Tampa?

TSN 1040 Vancouver:  Jets are a match-up disaster for opponents.  Dave Tomlinson says the Winnipeg Jets have four lines that do their specific jobs extremely well. Dave says the captain, Blake Wheeler, is their hardest working player and is getting better at the age of 31, while Mark Scheifele can beat you any way he wants.