Jets lose their big defenceman for a few weeks due to an injury he suffered in Tampa on Saturday. 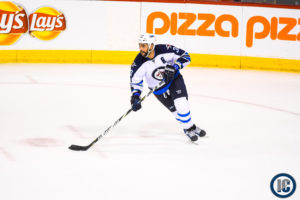 The Jets lost Dustin Byfuglien in the 2nd period of Saturday’s game against the Lightning in Tampa and today coach Paul Maurice indicated today following morning skate that the injury to his defenceman was “lower-body” and that the timeline was “week-to-week, sometime just after Christmas is what I’m shooting for.”.

The big Jets defenceman had played in 28 of 30 games for the Jets this season missing two earlier with a minor injury.  He is still looking for his first goal of the season while contributing 15 assists to date.

Tucker Poolman who hasn’t played for the Jets since October 17th and last saw action for the Moose back on November 17th draws back into the Winnipeg lineup.  The Jets haven’t recalled anyone from the Moose yet although I would expect it to be Julian Melchiori who played 18 games for Winnipeg last season.  If not Melchiori then it would be Cameron Schilling who has been the top defenceman for the Moose.