Note II:  The Moose are also playing tonight at 6 pm CT as they seek revenge for last night’s season opening loss to the Calder Cup champs in Grand Rapids.

Winnipeg Sun:  Jets and Flames look to regroup.  Neither team was particularly enamoured with their season opening loss.  Ken’s preview gets you ready for puck drop.

Winnipeg Free Press:  Jaromir Jagr will sit out Flames’ home opener against Jets.  (Paywall).  Jason sets things up for you from Calgary.

The Athletic:  Jets’ silent star, Dustin Byfuglien, has made his mark on Winnipeg without his words.  (Paywall).  As I said when players were announced for the home opener on Wednesday, I’m not sure there is a more popular player overall that the big man from Minnesota. 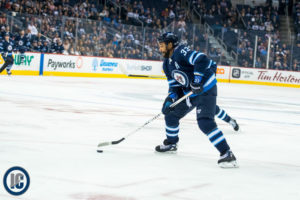 Illegal Curve:  Jets vs. Flames pre-game report.  Take a look at what happened this morning at the rink this morning as Winnipeg gets ready to face Calgary at the Scotiabank Saddledome tonight.  Audio: Steve Mason and Nikolaj Ehlers.

Illegal Curve:  Coach Maurice pre-game.  On Jets need for a bounce back.  Need for patience/composure.  On pre-season gelling.