Note:  After the game, be sure to check us out for all the post-game reaction from Dallas. As soon as illegalcurve.com is updated we notify you via Twitter | Facebook | Instagram.

Note II:  Jets coach Paul Maurice has announced that Bryan Little is expected out until end of November.

TSN:  Insider Trading (video). This doozy quote “The belief is Trouba doesn’t see a fit in Canada” from TSN hockey insider Darren Dreger about Jacob Trouba’s thoughts on playing for Winnipeg (or any other Canadian team I gather) via NHL GMs who said that there has been interest from other Canadian teams.  This won’t make folks around these parts very happy. (Starts at 2 minute mark).

The Hockey News:  More Jets losses might fast-track a Jacob Trouba deal.  Our readers seem to think that a trade is least likely of the possible scenarios (vote in the poll now) facing the Jets with their young RFA defenceman.

Winnipeg Sun:  Big minutes for Big Buff.  If they keep this up his minutes could equal his jersey number although coach Maurice has indicated that he will be trying to reduce the minutes he has big #33 playing on a nightly basis. 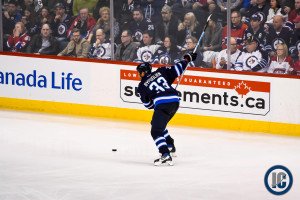 Winnipeg Free Press:  Jets looking to even series against Stars.  (Paywall).  Importance of the two points on the line cannot be overstated.

TSN:  Jets put new recovery plan into action amid gruelling stretch.  It will be very interesting to see how the Jets do, both in terms of on-ice success as well as health of players.

Metro:  Time is ticking for Jacob Trouba.  Nice timing by Hust as Trouba is now the last RFA standing with the Ducks signing of their RFA Hampus Lindholm.

Illegal Curve:  Jets vs. Stars projected lineups.  Take a look at what the lines looked like after skate today and what combos you should expect to see at MTS Centre this evening.  Audio: Nikolaj Ehlers, Kyle Connor, Dustin Byfuglien and Blake Wheeler.

TSN 1290 Winnipeg:  Hustler and Lawless.  TSN Hockey analyst Dave Poulin joins Hustler & Lawless to review the Hampus Lindholm contract extension with the Anaheim Ducks, and how that leaves Jacob Trouba as the lone unsigned RFA left in the NHL.

Illegal Curve:  Coach Maurice pre-game scrum.  What does he tell Kyle Connor when he draws back in? Challenge of the upcoming stretch.  What does Seguin do so well offensively?  Will he continue the rotation or is he waiting for someone to seize the reins?  On reducing Byfuglien’s minutes.  Frustration in not having Trouba after Lindholm signs.  Update on Little’s status.  Update on Drew Stafford?  Will they make a call up?

TSN 1290 Winnipeg:  The Big Show.  Play-by-play man Paul Edmonds joined the Big Show ahead of the Jets tilt against the Stars on Thursday talking Joel Armia’s stand-out performance, who the club calls up in Drew Stafford’s absence and why Kyle Connor has a chance to make an impact despite his healthy scratch on Tuesday.