Meet the Jets 1st round pick.

The Jets got their centre.  Cole Perfetti had 111 points (37 goals, 74 assists) in 61 games for the OHL’s Saginaw Spirit this past season.

Classy move by the Jets organization to have the wife of Dale Hawerchuk make the selection. 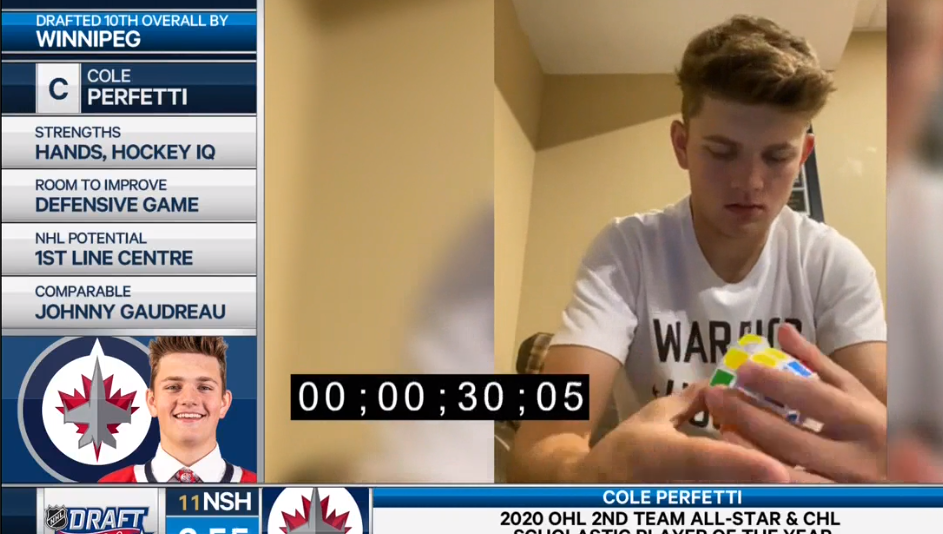 Here is how he was ranked ahead of the draft:

Here is what Elite Prospect said about him:

He’s a cerebral puck carrier able to create the time and space necessary for himself and his linemates. His ability to scan the ice and break down coverages ensure that possession rarely dies on his stick. He’ll problem-solve his way through incoming variables, advancing play in a threatening posture where most might lose the puck entirely.

Cole Perfetti is the smartest player in the draft. And he can pass like a wizard. Oh, and his shot is already elite.

Chris Peters of ESPN had this to say about Perfetti:

Perfetti was No. 4 on my final board. An elite playmaker who thinks the game at a high level. Not the fastest or biggest, but his processing speed is incredible, a legit shot-pass threat who always makes the right decisions with the puck. Winnipeg gets a gem in 1st like usual.

Jets got Kyle Connor after he slipped – we had him 5th. Our 4th ranked player is Perfetti. Perfett has the best hockey IQ in this draft class IMO. High end skill and can both score and make plays. I obviously love this pick. Great kid too. Interviewed him twice.

“Whatever you give him, he just makes his decision off of that. I’ve probably never coached a better player in all my years who understands where guys are around him and how to break down coverage,” Lazary said. “Then you add his natural ability to make a pass and play through traffic and it’s special.

“When he comes over our blue line, he already knows what’s going to hit him at their blue line. It’s insane to see a player of that mental capacity. You learn a lot as a coach, I’ll tell you that,” Lazary said.

You can read Scott’s full article ‘He’s the best player in this draft’: Cole Perfetti was raised for this’. (Paywall).