Breaking down games 11-20 of the Jets season.

In the first 10 games of the season the Winnipeg the Jets went (5-3-2) and we evaluated the goal scoring, the goaltending, special teams and injuries.  In the second segment of ten games the Jets have gone 7-2-1 with an overall record of 12-5-3 on the season.  The team continues to play well in front of the home crowd going 4-0-1 in Bell MTS Place and 3-2-0 when outside the province. 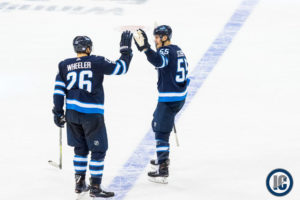 As you might expect with a team that put up 35 goals during this ten game segment a number of players increased their totals with Mark Scheifele making the biggest jump with seven, while Patrik Laine added six.  Both Kyle Connor and Mathieu Perreault came off the board with four goals each in this block to hit the five goal mark and #85 did his in the last three games since he returned from injury.  Nikolaj Ehlers and Blake Wheeler cooled down in the goal scoring department although the Jets captain did add 12 assists during these segment of games.

It has become the Connor Hellebuyck show in the second block of ten games.  The 2012 5th rounder out of Commerce, Michigan has take a stranglehold on the net starting nine of ten games. 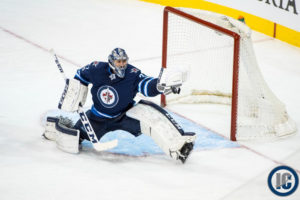 Goals Saved Above Average explained via In Goal Magazine:

You take the league’s average save percentage and apply it to the amount of shots a particular goalie has faced. You get a number of goals that the average goalie in that league would have surrendered if they faced the same number of shots as the goaltender in question. That number gets compared to the number of goals surrendered by that goaltender, and a plus/minus is created. If a goalie is in the positive, that is how many goals they have saved compared to a league-average goalie. If they are in the negative, then it is safe to assume that they are performing worse than how a league-average goaltender would perform in the same situation.

For a more detailed explanation of GSAA click here.

They have shown a very slight improvement in the PK and have moved up from 25th overall to 21st in the NHL with an overall penalty kill of 78.4%.

The Jets had a similar number of opportunities with the man advantage as they did in the first segment of 10 but this time they managed to double up the number of goals they scored during this block of games.  They have an overall 22.73% power play percentage which ranks them 6th overall in the NHL which is quite a jump from their rank of 21st overall after ten games.

Adam Lowry returned from his injury which cost him nine games and has played six games in this block of ten.  Mathieu Perreault has been out since mid October returning just three games ago.  Tobias Enstrom missed the final game in this segment of ten games but it was determined that the injury he suffered against the Devils in game 19 will cost him approximately eight weeks.

Following the final game of this block of 20 against the Predators the Jets bench boss was asked to assess his team at the 20 game mark and he indicated “We’ve been pretty darn consistent after our first 2 that we started the season.  We’ve had a couple that you don’t like.  Every team’s got that.  We’ve been pretty resilient in games.  But I would say we’ve been pretty consistent”.