Conference call with the Jets 2015 1st round pick Kyle Connor who signed yesterday. 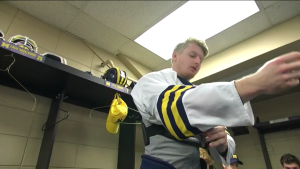 Kyle Connor put on the Wolverines jersey for the last time against North Dakota in the NCAA Midwest Regional Final on March 26th.  As soon as that game ended #ConnorWatch began.  On Friday, April 8th he was announced as the runner up to Jimmy Vesey of Harvard for the Hobey Baker Award.  The speculation began as soon as the Hobey Baker was announced that he could sign with Winnipeg soon and on Monday, April 11th, 2016 he announced his signing via twitter.

Today he held a conference call with local media and here is some of what he had to say:

– On factors that helped him make decision to turn pro “ready for next step. It was a family decision. I’m ready for this.”

– On chat with Michigan coach Red Berenson “it went well. he was understanding. it is obvious he doesn’t like to lose guys but it was a good chat.”

– On how close he is to be a contributor with Winnipeg: “That’s the goal for next season. Have a good off season, try to make the lineup and definitely, try to help them get back to the playoffs and see that whiteout at the MTS Centre.”

– On impression last summer’s camp left with him and on the fans: “I learned what it takes to be a pro and how to practice everyday….it was eye opening. the rink was packed for every single practice and the games. It was pretty cool.”

– On using social media: “It’s a good tool, if you use it wisely. You can definitely interact with the fans and see a different aspect of your life. I think its good for the fans as they feel apart of it.”

Thanks to Jon Waldman for the audio.