Which members of the Winnipeg Jets played in all 82 games this season? 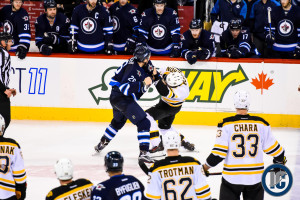 Playing a full season in the NHL is no easy task.  By the end of the year most players have been felled by some sort of injury and this year was no different for Winnipeg.  Key guys like Mark Scheifele, Mathieu Perreault, Nikolaj Ehlers, Tobias Enstrom, Bryan Little and Tyler Myers all were lost at some point this year for a significant amount of time.

Unlike last year when three Jets managed to play a full 82 games the list this season was down to Chris Thorburn (played 81 in 2014-15) and Blake Wheeler (played 79 in 2014-15).  Dustin Byfuglien, Jacob Trouba and Alexander Burmistrov managed to get into 81 games this year, which were big jumps for #33 (12 more games than previous year) and #8 (16 more games than previous year).

It is all the more impressive that Blake Wheeler is able to play a full season when he is the focus of the other team’s best players on a nightly basis and doesn’t shy away from the physical contact.