WHL hockey is coming back to Winnipeg. 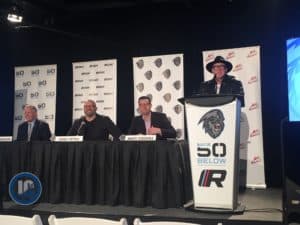 Twenty-five years after the Winnipeg Warriors moved to Moose Jaw, Saskatchewan the WHL is back in the city after the owners of the Kootenay Ice made it official that they were relocating their franchise to Manitoba.  This gives the province two WHL franchises now as the Ice will join the Brandon Wheat Kings in the Eastern Conference starting next season.

The team will play out of Wayne Fleming Arena at the University of Manitoba over the course of the next two seasons before the rink they are building will be complete.  During this time they will be making a number of upgrades to the facility at the U of M to make it a viable spot for WHL hockey.  You can reserve your tickets starting on Wednesday morning (9 am) on their website winnipegice.ca.

Greg Fettes and Matt Cockell were the two representatives of 50 Below Sports + Entertainment speaking today and they discussed how they plan on making this not just about WHL hockey but the plan is to develop a world class area that will make Winnipeg the hockey capital of Canada.  It is an ambitious project but the backers behind this initiative are folks who usually plan things out pretty methodically so they’ve likely done their homework.

The arena is expected to be a 4500 seat entertainment complex built out in the RM of Macdonald.

They also announced that they were in negotiations to purchase the Winnipeg South Blues to ensure the long term viability of that Manitoba Junior Hockey League franchise.

Greg Fettes, Chairman of 50 Below Sports & Entertainment joined Andrew Paterson and Rick Ralph on the Afternoon Ride. They discussed the announcement that the WHL’s Kootenay Ice will be moving to Winnipeg and the upcoming development with The Rink in Winnipeg.  Listen here:

Are you excited to have another option for hockey here in Winnipeg?  And does this mean that we will now start covering WHL hockey?  Stay tuned.