Capitals come into the MTS Centre following a 5-1 loss to the Flyers. Scrums with Ovechkin, Backstom, Halpern, Eakin and coach Hunter. 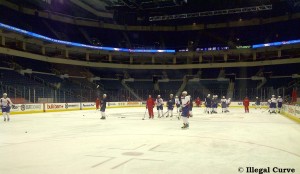 Alexander Ovechkin – Impact of Dale Hunter on team.  How he is playing under the new system.  Frustration with his game.  Talks about first two games against Winnipeg, mentions Pavelec’s success.   Atmosphere at MTS Centre.

Cody Eakin –   Playing in his 1st season.  Transition to new coach.   Playing in front of hometown fans.  Who to lean on.

Coach Hunter – Transition to head coach.  What he likes about his team.  Top 3.  Scouting report on Jets.  Being back in Washington, leading the team.  Trying to turn the team around.  Caps goaltending.  Winnipeg fans.

Update:  We also have post-game audio from Neuvirth, Ovechkin, Eakin and coach Hunter.