Want tickets to the Jets home opener against the Habs? If so, be prepared to break the piggy bank.

Let us know in the comments where you plan on watching the game? Are you one of the lucky few to be at the MTS Centre? What do you guys think of the prices of tickets?

Next Sunday afternoon should prove to be a day without parallel in Winnipeg sporting history.  The Jets 2.0 return to the ice for the 1st regular season hockey game in this city since 1996.  If the atmosphere from the exhibition games are any indication, it is going to be ‘lights out’ at the MTS Centre. 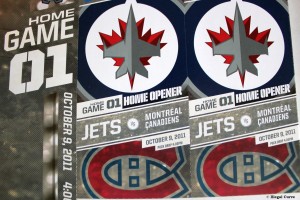 However, the capacity for the arena is 15,004 seats.  This means that there will literally be tens (if not hundreds) of thousands of Jets fans left to watch the game in a number of other venues (like the Forks, Convention Centre, sports bars, Man-cave’s, etc).

What do you do if you are one of the lucky few individuals to have a ticket to this contest but take a bit more mercenary approach to these types of opportunities.  It would appear that there are a number of people who look at the Jets home opener and see it as a means for making a profit.  And we aren’t talking a few dollars either.

A quick search of sites like kijiji or stub hub will quickly garner a bunch of hits with people offering to trade or swap their tickets.  And we’re assuming interesting trades such as screen legend Anthony Quinn’s undershirt won’t be accepted.

Some of the seller’s are getting creative in an attempt to circumvent breaking the law:

I am selling my Chris Pronger Hockey Card for $650 OBO. Purchase my Hockey Card and i will give you my Winnipeg Jets Home Opener Ticket For Free. The ticket is in the upper part of section 303. Serious Emails only Please

Of course the above Pronger rookie card is valued at approximately $20, but perhaps the seller has an attachment to the card and hence the huge mark up.  I’ve also seen ad’s whereby the tickets were listed ‘for free’ but you had to pay $1,500.00 for a AAA Duracell battery.

When IC’s Michael Remis looked at this issue (in a broader context) the Oct 9th game against the Habs had 55 tickets listed, with the lowest price being $625, the highest being an insane $7,500.  As of today’s date, there are 67 tickets available.  Lowest price is $749 for an upper deck seat with the highest priced tickets along the ice going for a whopping $3000.  The map below shows all the available seats on Stubhub. 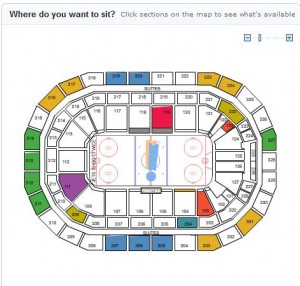 So what is a hockey-crazy Jets fan to do?  Do you take a 2nd mortgage out just to get yourself to the game?  Or do you save yourself the money and find an alternative means of enjoying the festivities?

The choice is yours to make but remember that you can get as much enjoyment watching the game with tens of thousands of screaming fans at the forks as you might at the MTS Centre.  The day is what you make of it.  Wherever you end up, we hope you enjoy the return of NHL regular season hockey in Winnipeg.

Let us know in the comments where you plan on watching the game?  Are you one of the lucky few to be at the MTS Centre?  What do you guys think of the prices of tickets?