Coach Maurice comments on Jets Mathieu Perreault who left in 2nd period; Flyers Joel Farabee will have a hearing tomorrow with Department of Player Safety

Jets forward left the ice after a brutal hit in the 2nd period. 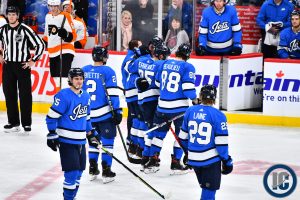 This afternoon at Bell MTS Place Mathieu Perreault took a pretty brutal hit by the Flyers Joel Farabee in the 2nd period which resulted in the Jets forward leaving the game and the Flyers forward getting a five-minute major and a game misconduct.

If you missed it here was the hit:

Joel Farabee gets a five-minute major and a game misconduct for a late hit on Mathieu Perreault pic.twitter.com/BBI7UXIedc

“He’s moving around. I’m not saying he’s fine. He’ll get checked and tested tomorrow and I’ll give you a real strong update.”

Asked about the hit it was clear the Jets bench boss didn’t like it:

“That’s the most dangerous play in hockey. Even a hit from behind a player has a sense that it’s coming and that’s why that five-minute interference came in because it can be devastating. So the referee’s certainly got it right on the ice.”

The Department of Player Safety obviously agreed with the Jets bench boss as they announced on twitter that Farabee will have a hearing tomorrow for the hit.

Philadelphia’s Joel Farabee will have a hearing tomorrow for Interference on Winnipeg’s Mathieu Perreault.