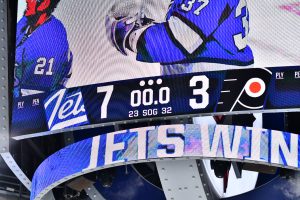 The Jets kicked off their three-game homestand with a bang as they scored seven goals in a commanding win over the Philadelphia Flyers. It was the Jets 20th win of the season and they improve to 20-11-2 on the season.

– Mark Scheifele took the team lead in goals (15);
– Nikolaj Ehlers & Kyle Connor are tied for second (14);
– Logan Shaw scored his first NHL goal since February 8th, 2018, which was coincidentally scored against the Flyers.

Coach Maurice:  Update on Mathieu Perreault?  How did he see that play?  Heading to the power play with the major penalty.  Importance of Wheeler scoring that goal because it forces teams to respect his shot.  Neal Pionk playing on the power play.  Logan Shaw getting his first since Feb 2018.  More confidence in this 4th line?  Securing their 20th win of the season.  The performance of Hellebuyck in the 1st period.  Wheeler handling the Flyers.

Coach Maurice didn’t have much of an update on Mathieu Perreault who left the game in the 2nd period after a brutal hit aside from “He’s moving around. I’m not saying he’s fine”.  He said and he expects to have an update on Monday after the veteran forward gets further testing done.  The Flyers Joel Farabee, who delivered the hit and got ejected, will be spending part of his Monday chatting with Player Safety.

The Jets schedule is not out yet but the team will likely be back on the ice on Monday to get ready for their game against the Hurricanes on Tuesday.  You can kick start your day with the Morning Papers which go live tomorrow at 7 am on illegalcurve.com.