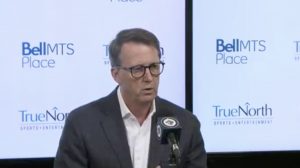 With news that the NHL and AHL had suspended their seasons today and with the Jets flying back from Alberta and the Moose coming back from Wisconsin, chairman of True North Sports & Entertainment Mark Chipman provided an update on the situation as it pertains to the local NHL and AHL teams in Winnipeg.

Mark Chipman’s scrum topics:  Statement.  When did he first get a sense that this could be serious?  How difficult was the decision?  How much of a priority is awarding the Stanley Cup this season?  What are the contingency plans for best and worst case scenarios?  What will the coaches and players do for next little while?  Will players be paid during this time?  Have any players shown any signs of illness?  Did he get the sense that this would be unanimous?  The amount of unknown.  Are they testing players/staff?  What happens with fans who have paid for tickets?  Is there a drop dead date to be playing hockey?  Could it go into the summer?

This covers topics related to the hockey clubs.  You can watch/hear the full presser here.