The story of two traveling Sharks fans journey to Winnipeg

Leaving sunny California behind for frozen Manitoba can only make sense to hockey fans. Come meet two cousins who followed their beloved Sharks to Winnipeg.

First we had AllyK, who made her intrepid journey to Winnipeg to see the Jets home opener.  Now we want you to meet cousins Bryan Lynch and Mike Peterson.  These two guys from sunny California try and make a road trip each year to watch their beloved San Jose Sharks play in another city’s building.    This season it worked out that they were going to be able to make the trip to Winnipeg to see the reincarnated Jets 2.0 take on their Sharks.

Of course knowing that tickets are a hot commodity, they took to the Winnipeg Jets section of the HF Message Boards to spread the word of their arrival and to inquire with locals as to what is the best means of procuring tickets.  Almost 200 comments and 7000+ views later, Peggers’ were offering advice on everything from hotels to whether to rent a car and where to eat.  Brad, a gracious and quite generous member of the HF Jets community even gave the cousins a pair of seats in the 105 section.  Not only that but he picked them up at the airport and dropped them off at their hotel.  If that doesn’t define ‘Friendly Manitoba’ I don’t know what does.

We had the chance to ask the cousins some questions about why they chose Winnipeg and their preliminary thoughts on our fair city.

Q.  How did you guys start this tradition?

A.  My Cousin and I had lost touch for most of our lives.  When we started talking after years had gone by, we found out that we both LOVED hockey.  This may not sound like a huge deal in Canada, but in California it may as well have been a bonafide miracle.  We started going to games together (Sharks mostly, though Mike also had Fresno Falcons/ECHL season tickets).  We began by driving to the teams closest to us (Anaheim mostly) but it wasn’t really a tradition.  We just decided one year after a “How cool would this be” conversation that it would be awesome to see the Sharks play all of the NHL venues before we died.  Instead of continuing to talk, we just decided to book the trip. So far, we’ve done Winnipeg 2011, Calgary / Edmonton / Los Angeles 2010, Phoenix 2009, Anaheim 2008 and 2005.  I’ve also been to Carolina and Washington DC, but those don’t count against our goal since the Sharks weren’t playing at the time.  It has been one of the best decisions we have ever made and a worthy life-long goal to achieve.  We get to see the world and we’ve made friends in nearly every city we’ve visited.  I’ve had two sons in the last two years and I hope that in a few years, I’ll be able to share this adventure with them.  As far as my wife is concerned, she should be granted sainthood for taking care of our little ones and being OK with me doing this.  Thank you Mary, I Love You! 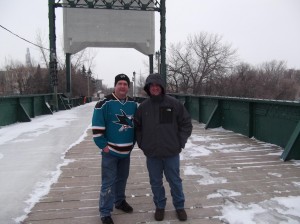 A.  When we committed to doing at least one trip a year, Mike’s first pick this year was Winnipeg.  You only get so many chances to see a new (or reborn) team play in the NHL in their first year.  We almost booked Chicago due to the considerably smaller travel expense, but in the end we came to our senses and booked Winnipeg.  Besides, the Canadian trips are the most fun right?

Q.  What did you think when you got offered everything from free drinks to free lower bowl  tickets on HF Boards?

A.  To be honest, we thought you all were playing a joke on the gullible Americans!  I still to this very moment sitting here in our hotel room cannot believe what has been provided to us, a pair of total strangers.  From the FREE premium tickets OVERNIGHTED to us by Brad (ps241), to having Brad show up at the airport as a surprise to drive us to our hotel, it still all seems too good to be true.  I have to say that this is my fourth trip in to Canada and on every occasion, we have been welcomed with open arms by our Canadian hosts.  The hospitality and generosity of Manitobans has been unparallelled by any other experience in my 32 years.  Even at lunch today a woman gave us a hug and welcomed us to Winnipeg.  We talked with her and her friends all through lunch and they thanked us for coming here.  I have never experienced anything like this.  We couldn’t possibly be more humbled and grateful.  There is no possible way for us to ever fairly repay the favor.  I also think that if I accept all of the free drinks offered, I’m not going to be able to walk very well after the game 🙂

Q.  When you heard Winnipeg in January, did you have any idea what to expect?  What have your first impressions been like?

A.  Cold. Cold. More cold.  From the replies on my hfboards.com topic, people couldn’t believe that we would come from sunny California to the frozen tundra of Winnipeg at this time of year.  For us, the icy weather and scenery is a welcome treat.  My very first impression of Winnipeg came on the airplane as we approached YWG.  Looking out the window I could see rink after outdoor rink peppered across the land with kids skating.  That is an alien sight to those of us living in California.  Very cool.  Everything else we’ve seen in our 10 hours here so far has been beautfiul.  The Forks area is beautiful.

Q.  What was it like hanging with the Sharks at Earls Main? 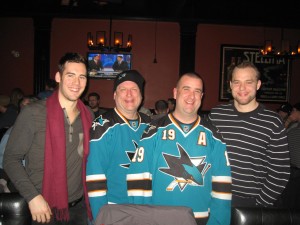 A.  Earlier in the day, we were walking around the Forks area wearing our jerseys.  A group of people walked by us and yelled “Hey Sharks fans!.”  As we braced for our heckling, one of them shouted “My friend here plays for the Sharks…him…the tall one!”  We thought they were just messing with us and kept walking.  After reconsidering though, we felt like we missed a great, and possibly only, chance to meet a Shark player on this trip.  Brad told us to head to Earl’s tonight and that the Sharks might be there.  We had no idea that he would be 100% right.  We took a seat at the bar and noticed after a few double-takes that Logan Couture, Antti Niemi, James Sheppard, Colin White, Benn Ferriero, Douglas Murray were sitting right behind us!  We spent a good 40 minutes trying to find a way to approach them without annoying them too much.  Finally I called their waitress over and asked her to let us buy them a round of drinks and to tell them good luck tomorrow.  They were very cool with us and spent a considerable amount of time talking with us.  When it was time to settle our bill at the end of the night, we had found that they had bought us several rounds without saying anything.  Thanks guys!  They were appreciative that we would travel this distance to see them.  All of them treated us like regular, down-to-Earth guys.  It was an absolute pleasure.

Q.  What has made this trip unique from the other road trips you’ve taken?

A.  I think the main stand-out features of this trip have been the hospitality shown by Jets’ fans and the punch-in-the-face cold outside.  The other difference is that we get to see your Jets in their first year!  We may not get that kind of opportunity again for decades to come, if ever.  Considering many people cannot even get tickets without spending a month’s wage, we can’t believe we’ll be sitting center ice.

Q.  What are your expectations of the MTS Centre crowd?

A.  Last year in Calgary, as we were leaving the game, a lady grabbed us and snuck us back down to the ice.  She had heard that we were in from San Jose.  As it turns out, the Sharks were meeting friends and family after the game and we got to spend time talking and taking pictures with them.  Another supremely nice deed from a Canadian stranger.  Before that, a nice little old lady on the airplane drew us a paper map of how to drive from Calgary to Edmonton.  She spent a lot of time on it,  It must be in your blood!  It’s something for us to try to live up to when we see traveling fans visiting the HP Pavilion in San Jose.  It really sets an example of how to treat guests on your home ice.

I have to say again that we are eternally grateful to the Jets fans from hfboards.com and Brad in particular.  They have taken two totally foreign strangers and made us feel like we hit the hockey lottery!  We’re just two regular hockey fans from the states, but as Mike and I discussed today, we feel like we have finally come home.  The term “Friendly Manitoba” is a gross understatement.

On Friday, we will get the guys thoughts on the game, the MTS Centre crowd and their overall impression of the trip to Winnipeg.  If you see them tonight, be sure to give Mike and Bryan a ‘Friendly Manitoba’ hello!!