Coach McCambridge discusses how his career has progressed with True North Sports and Entertainment, and what specific Moose players need to do to make the NHL – Armia, Morrissey, Kostalek, de Leo, Kosmachuk, Fronk, Hellebuyck, and Comrie 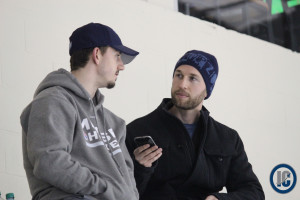 Nic Petan talks about his road back to the NHL, and which players he models his game after.

At the start of the season, it’s probably fair to say that Moose fans weren’t familiar with Jiri Fronk. But after playing just 1 game in October, Fronk got his opportunity when injuries to John Albert, Matt Fraser, and Jimmy Lodge opened room for the Czech born winger. Quiet in his first two games, Fronk burst on the scene in the two-game series against the Chicago Wolves, scoring the tying goal in both games – one on a slick breakaway deke, the other on a quick wrap-around; the latter helped the Moose earn earn their first home. So what’s his story?

Jiri Fronk has taken an unusual path to this point in his career. After spending most of his junior career in the Czech Republic, Fronk played a year in Russia’s junior league (MHL), before coming to the USHL last season – a league mostly filled with US-born junior players who intend to play NCAA (college) hockey. (Check out his stats here). Fronk had originally wanted to play in the CHL in hopes of being drafted by an NHL team, but his Czech team wouldn’t release him. As a result, he wasn’t drafted, and at 21, he was looking for a place to play pro hockey. He got an AHL contract with the Moose, not the standard “Entry-Level Contract” that most young prospects get with an NHL team. One could assume that a Jets scout would have spotted Fronk when they were scouting Erik Foley, a teammate of Fronk’s in the USHL whom the Jets drafted 78th this past summer.

Not only is the move paying dividends now, but it could be a steal down the road. While he needs to mature physically, his skating is at least average, and will only improve as he strengthens his legs. And while coach McCambridge pointed out that he needs to learn the structure of professional hockey, the same could be said for the vast majority of young players. The exciting parts of his game are those that you can’t teach in the weight room or the video room – he’s a goal scorer with slick hands, a good frame (6’2, 190+), and he is both creative and imaginative. He seems good at finding open space, and he’s shown a knack for scoring big goals. While it’s still very early in his pro career, it’s always exciting to unearth an undrafted player who may possess NHL-level skill.

Thomas Raffl made his return to the Moose lineup on Sunday against Bakersfield. While held off the score sheet, Raffl was strong along the boards in the offensive zone, using his size and strength to protect pucks, make space for his linemates, and create scoring chances. He played on the left side along with Patrice Cormier and Matt Halischuk, and the line looked better and better as the game went on. Raffl also got considerable powerplay time, and generally looked quite good for a player who had missed the last 13 games. One of the more memorable plays came when a Bakersfield player tried to hit him in open ice – apparently he was unaware that Raffl, who stands 6’4, 215, is basically a tank, because he bounced off him and promptly hit the ice. With the Jets currently playing with just 12 forwards, and needing a winger, Raffl is one of the likely call-up options along with J.C Lipon, and perhaps Joel Armia.

While their cumulative season totals are disappointing – a record of 4-9-1-1, and 26 goals for (last in the AHL), things are starting to turn around. For instance:

The Moose are winners of two of their last three, winning the second game against the Chicago Wolves last Friday, and one-of-two against the Bakersfield Condors. They had also outshot their opponents in three straight games heading into yesterday (shots were close – 33-28) – a far cry from the early-season games where they were often getting outshot roughly two-to-one. (Shots on Oct. 17 were 45-20 for Ontario).

As far as individual stats go, Brenden Kichton continues to lead the team in scoring, with 10 points in 15 games, while J.C Lipon leads the team with 5 goals. While Connor Hellebuyck has been great this season in goal, Eric Comrie’s stats are actually even better, with a record of 2-2-1, 1.77 GAA, and a .944 save%.

The Moose set out on a 6-game road trip beginning with Lake Erie on Wednesday, and ending in Toronto on December 6th. It’ll be a tough stretch, but it’s clear that the team has a renewed confidence, and their play has even more room to improve if they can get back a few veteran players like John Albert, Jay Harrison, and the recently signed Kelly Zajac.