Recapping the 15th Moose game of the season. 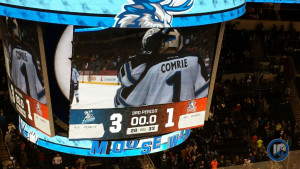 Seeking revenge for Friday night’s 2-1 loss, the Moose once again took on the Bakersfield Condors in a matinee affair at the MTS Centre. Austrian winger – and potential Jets call-up – Thomas Raffl returned after missing the last 13 games.

Joel Armia made the first great play of the game, coming in 2-on-1 with J.C Lipon – when the Bakersfield defenceman didn’t commit to either attacker, Armia fed a smart pass to Lipon, who tapped it in to put the Moose up 1-0, about halfway through the first period.

With 11 seconds left in the first period, Anton Slepyshev tied the game for the Condors, as he walked straight in from the left half-wall and into the slot (unchallenged), and fired a shot past Eric Comrie’s glove.

With Austen Brassard breaking to the net, Scott Kosmachuk feathered a gorgeous pass just past a defender’s outstretched stick; Brassard picked it up and made an exclelent, quick move to his forehand and potted it to put the Moose up 2-1 with a minute left in the second.

Early in the third period, Scott Kosmachuk took a nice cross-ice feed from Brenden Kichton and unleashed a very accurate one-timer from the high-slot, beating Laurent Brossoit short-side and putting the Moose up 3-1 just a few minutes into the third.

Still early in the third, Eric Comrie made the first of several tremendous stops – admittedly off his own (bad) rebound. Nonetheless, it kept the game 3-1 for the Moose.

A few minutes later, a one-time snap-shot from the slot got by Comrie, but struck iron, keeping the score 3-1.

Mid-way through the third, Eric Comrie made a great save on a quick deflection. Still 3-1 Moose.

With about 7 minutes left, Ryan Olsen drove hard to the net and drew a penalty to give the Moose a PP. While they didn’t score, it helped steal a bit of momentum from their opposition.

With around 5 minutes left – and the Moose at the tail end of their powerplay – Eric Comrie made another fantastic save to stymie the Condors.

(1) Scott Kosmachuk – He set up the go-ahead goal by threading the needle beautifully, then scored the insurance marker on a shot most guys in the AHL don’t possess. He even got on the ice with a minute to play to defend the lead. Kosmachuk played easily his best game of the season tonight.

(2) Eric Comrie – Comrie was solid early on, and stellar with the lead, making 32 saves on 33 stops as he guided the Moose to the win. Positionally sound with great side-to-side movement, Comrie will carry the mail for the Moose as long as Connor Hellebuyck remains up with the Jets.

(3) Joel Armia – He created the play which put the Moose up 1-0 and was a dominant player in the first period, creating scoring chances out of skill and ingenuity. He’s been good several games in a row now; if a big, top-6 winger like Wheeler, Stafford, or Ladd,  and is showing signs that he might.

Matt Fraser and Thomas Raffl returned to the lineup

Jay Harrison remains day-to-day, while John Albert, Jimmy Lodge, and recently signed Kelly Zajac are all a little further away.