It’s been a difficult start to the year for the Manitoba Moose. They currently sit second last overall in the AHL, with a record of 9-17-1-3. They’re also dead last in goals scored (63), while their goal differential of -36 is second last.

If you asked Moose Head Coach, Keith McCambridge, he’d tell you that the biggest factor in the Moose’s results has been youth. The AHL is a much tougher league than some give it credit, and the transition from amateur to pro hockey is rarely smooth for a young player. 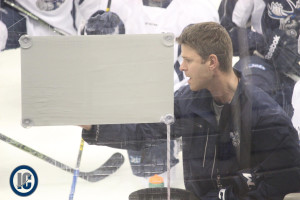 I was able to sit down with Keith McCambridge recently to get his insights into his team’s play, and the play of particular Winnipeg Jets prospects.


At the start of the new year, here’s my look at where many of the young Moose players are at in their pro careers, and what areas they need to improve to make it to the next level.

Note: Only players on NHL Entry-Level Contracts are considered “prospects”

Since being re-assigned to the Moose, Petan has been a huge boon for the team’s offence. With 13 points through 17 games, the rookie centre leads the team in points-per-game, and is the most prominent figure on the Moose powerplay. While Petan will always be undersized, his vision, and playmaking ability are world class, and it’s only a matter of time before he brings those skills back to the NHL. In the meantime, the main thing he needs to work on is playing with more pace, as his natural desire to slow the play down can’t be used in all situations.

Chase de Leo has had an impressive start to his pro hockey career. From game 1 to 30, de Leo has probably been the most consistent Moose forward, coming second in team scoring with 17 points, and generating good scoring chances on a nightly basis. However, the road to the NHL will be a steep climb for de Leo, who’s generously listed at 5’10, 180 (he’s probably closer to 5’8); while his skating is good, it’ll need to be near-elite if he’s going to be able to create space and separation against NHL defenders.

In his third season in the AHL, Lipon is one of the young leaders for the Moose, and brings effort and tenacity on every shift. He also brings a little skill – in fact, he was leading the Moose in scoring until a few weeks ago, when he missed 6 games due to injury. Lipon projects as a bottom-6 forward in the NHL, but he’ll need to continue to add strength and speed if he’s going to climb to the next level. The good news is that he’s already done a great job at improving both in the past few years, so there’s reason to believe that his work ethic will carry him onto the Jets 4th line one day.

In his second AHL season, Kosmachuk has shown flashes of top-6 NHL potential. He has an NHL release, with the ability to score from many different spots on the ice – particularly from his off-wing on one timers and quick snappers. He also has soft hands and underrated passing ability. However, like many talented AHL’ers, Kosmachuk lacks size, and his skating is mediocre. If he’s able to significantly improve his skating, he might be able to crack the NHL one day, but he doesn’t look like the type of player who will play in the bottom-6.

Based on his draft pedigree, and career stats thus far, you wouldn’t think too hard about Austen Brassard as an NHL prospect. But now in his third AHL season, Brassard has quietly been impressing, showing flashes of soft hands and a good release that weren’t apparent in past years. He’s already set a career high in goals this season – 7, and will likely exceed last season’s point total soon. Of course, his main gift is size – 6’3, 210+ – and while he’ll never be a skill guy at the next level, if he were to add more speed, he’ll have a shot as a depth forward at the NHL level.

In his second AHL season, Olsen has shown good speed for a big man, along with a strong work ethic and good physical play. However, he has also displayed a bad habit – taking undisciplined minor penalties, and his skill level is below all the other forwards on this list. Olsen may one day get a call-up at if an NHL team runs into injuries, but with 16 points through his first 90 AHL games, it doesn’t look like he has enough ability to take a regular shift in the NHL.

Lodge has struggled in his rookie season, showing few traces of the player who was considered by many as a second round talent in the 2013 NHL Entry Draft. He looks slow, out of sync, and generally uncomfortable on the ice, and hasn’t been able to produce much offence so far, scoring just 1 goal in 16 games, on a play where the puck was likely headed in without his efforts. While he’s just at the start of his pro career, he’ll need to add a lot of speed and strength just to compete at the AHL level.

Blomqvist is intriguing because of his size – 6’7, 220. He showed some skill in junior, scoring roughly a point-per-game in the WHL the past few years, but has been unable to carry that to pro hockey. After no points in 10 games, he’s currently in the ECHL, where he’s scored 2 points in 6 games. His skating would need to improve tremendously to become a true NHL prospect.

While he isn’t setting the scoresheet on fire – just 7 points in 30 games – Morrissey still possesses all the tools that scouts liked about him on draft day. He’s a great skater, with soft hands, and great vision and passing ability. He may not have the high-end upside that some may have hoped, but once he gets more experience under his belt, he’ll be a solid puck mover who can help run the powerplay at the NHL level.

Currently leading the Moose in scoring with 19 points in 26 games, Kichton is a very smart player with great skill and offensive instincts. However, his size is a major hurdle to him matching up against NHL forwards; he’s listed at 6′, 190, but is probably closer to 5’10, 180. His skating is pretty good, but will need to improve even more if he’s going to spend meaningful time in the NHL.

A decent skater, with fair size, and average hands, Kostalek’s issue is that he lacks a dominant strength. His best trait is his intelligence and decision making, so if he adds a little more size and speed, in addition to experience, he could become a reliable, bottom-pair NHL defenceman one day.

Eric Comrie has had a great start to his professional career – he is likely the Moose MVP through the first 30 games of the Moose’s season, recording all but two of their wins on the year. He has shown remarkable consistency for a rookie, starting with his very first game in Toronto in early October. Comrie is an athletic goaltender who is well positioned in the net. He’s also very mature for a 20-year-old, with tremendous work habits, and a great awareness of what he needs to do to improve as a goaltender. The one concern with Comrie is his size – at a hair under 6’1, Comrie is small by today’s goaltending standards, where many goaltenders coming into the NHL are 6’3, 6’4, or even larger. Regardless, Comrie likely has a future as an NHL netminder.